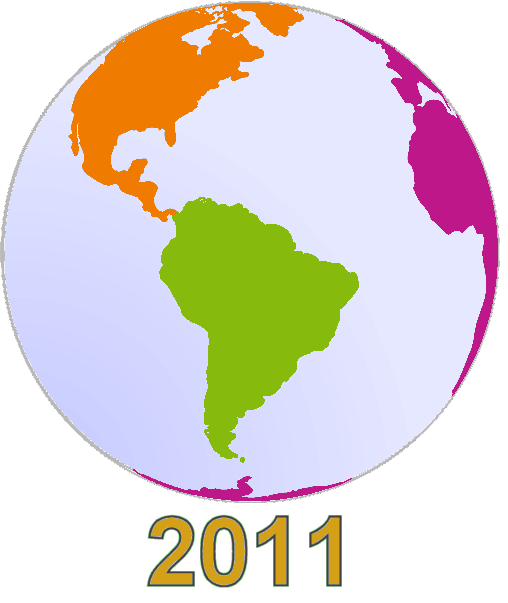 Number of Semantic Web Tools Passes 1000 for First Time; Many Other Changes

We have been maintaining Sweet Tools, AI3‘s listing of semantic Web and -related tools, for a bit over five years now. Though we had switched to a structWSF-based framework that allows us to update it on a more regular, incremental schedule [1], like all databases, the listing needs to be reviewed and cleaned up on a periodic basis. We have just completed the most recent cleaning and update. We are also now committing to do so on an annual basis.

Thus, this is the inaugural ‘State of Tooling for Semantic Technologies‘ report, and, boy, is it a humdinger. There have been more changes — and more important changes — in this past year than in all four previous years combined. I think it fair to say that semantic technology tooling is now reaching a mature state, the trends of which likely point to future changes as well.

Click here to browse the Sweet Tools listing. There is also a simple listing of URL links and categories only.

We first present our key findings and then overall statistics. We conclude with a discussion of observed trends and implications for the near term.

Some of the key findings from the 2011 State of Tooling for Semantic Technologies are:

Many of these points are elaborated below.

The updated Sweet Tools listing now includes nearly 50 different tools categories. The most prevalent categories, each with over 6% of the total, are information extraction, general RDF tools, ontology tools, browser tools (RDF, OWL), and parsers or converters. The relative share by category is shown in this diagram (click to expand): 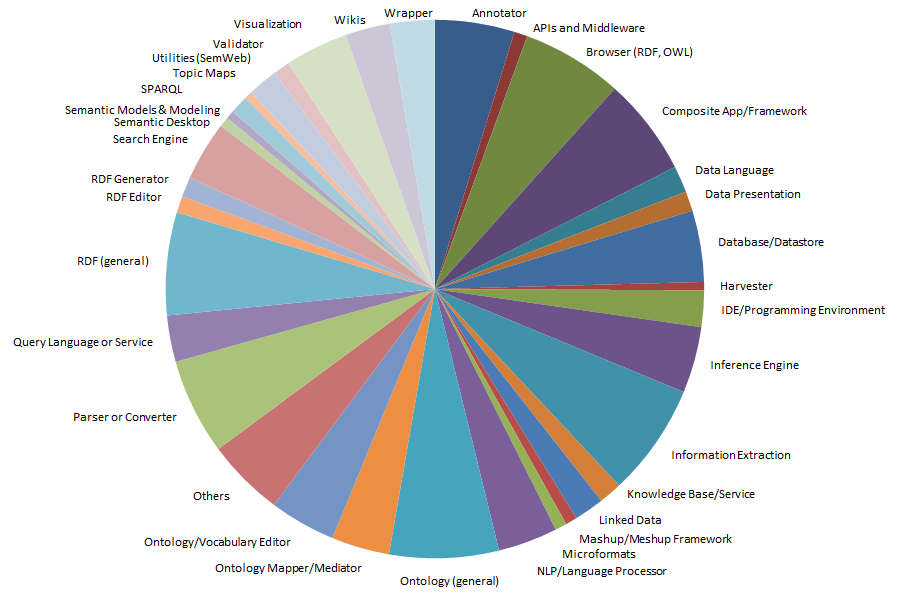 Since the last listing, the fastest growing categories have been SPARQL, linked data, knowledge bases and all things related to ontologies. The relative changes by tools category are shown in this figure:

Though it is true that some of this growth is the result of discovery, based on our own tool needs and investigations, we have also been monitoring this space for some time and serendipity is not a compelling explanation alone. Rather, I think that we are seeing both an increase in practical tools (such as for querying), plus the trends of linked data growth matched with greater sophistication in areas such as ontologies and the OWL language.

The languages these tools are written in have also been pretty constant over the past couple of years, with Java remaining dominant. Java has represented half of all tools in this space, which continues with the most recent tools as well (see below). More than a dozen programming or scripting languages have at least some share of the semantic tooling space (click to expand): 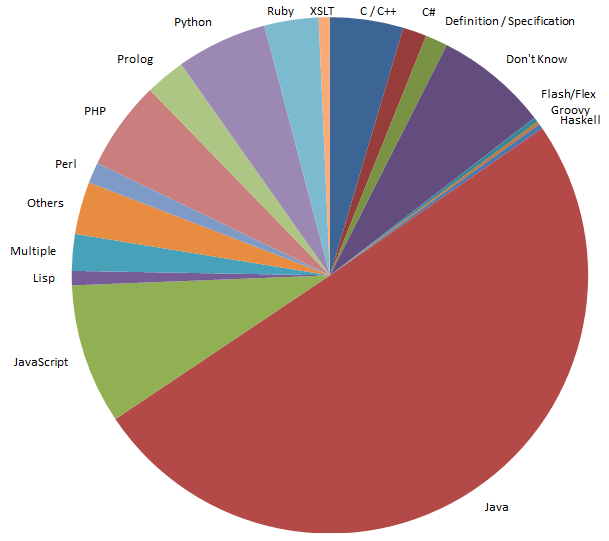 With only 160 new tools it is hard to draw firm trends, but it does appear that some languages (Haskell, XSLT) have fallen out of favor, while popularity has grown for Flash/Flex (from a small base), Python and Prolog (with the growth of logic tools):

PHP will likely continue to see some emphasis because of relations to many content management systems (WordPress, Drupal, etc.), though both Python and Ruby seem to be taking some market share in that area.

The newest tools added to the listing show somewhat similar trends. Again, Java is the dominant language, but with much increased use of JavaScript and Python and Prolog: 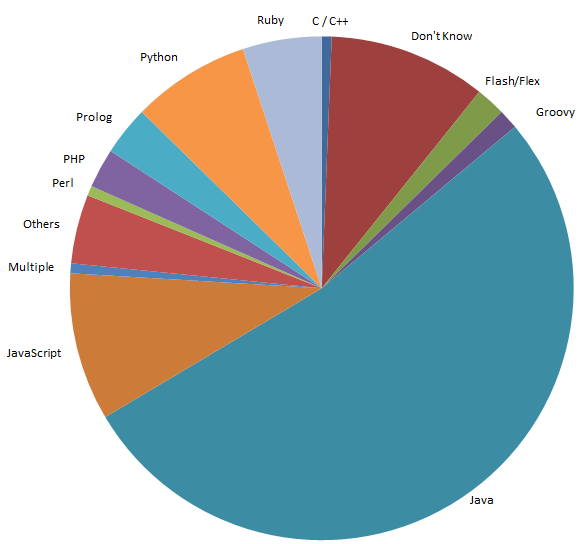 The higher incidence of Prolog is likely due to the parallel increase in reasoners and inference engines associated with ontology (OWL) tools.

The increase in comprehensive tool suites and use of Eclipse as a development environment would appear to secure Java’s dominance for some time to come.

These dry statistics tend to mask the feel one gets when looking at most of the individual tools across the board. Older academic and government-funded project tools are finally getting cleaned out and abandoned. Those tools that remain have tended to get some version upgrades and improved Web sites to accompany them.

The general feel one gets with regard to semantic technology tooling at the close of 2011 has these noticeable trends:

I have said this before, and been wrong about it before, but it is hard to see the tooling growth curve continue at its current slope into the future. I think we will see many individual tools spring up on the open source hosting sites like Google and Github, perhaps at relatively the same steady release rate. But, old projects I think will increasingly be abandoned and older projects will not tend to remain available for as long a time. While a relatively few established open source standards, like Solr and Jena, will be the exception, I think we will see shorter shelf lives for most open source tools moving forward. This will lead to a younger tools base than was the case five or more years ago.

I also think we will continue to see the dominance of open source. Proprietary software has increasingly been challenged in the enterprise space. And, especially in semantic technologies, we tend to see many open source tools that are as capable as proprietary ones, and generally more dynamic as well. The emphasis on open data in this environment also tends to favor open source.

Yet, despite the professionalism, sophistication and complexity trends, I do not yet see massive consolidation in the semantic technology space. While we are seeing a rapid maturation of tooling, I don’t think we have yet seen a similar maturation in revenue and business models. While notable semantic technology start-ups like Powerset and Siri have been acquired and are clear successes, these wins still remain much in the minority.

[1] Please use the comments section of this post for suggesting new or overlooked tools. We will incrementally add them to the Sweet Tools listing. Also, please see the About tab of the Sweet Tools results listing for prior releases and statistics.

headline:
The State of Tooling for Semantic Technologies
alternativeHeadline:
Number of Semantic Web Tools Passes 1000 for First Time; Many Other Changes
author:
Mike Bergman
image:
http://www.mkbergman.com/wp-content/themes/ai3v2/images/2011Posts/sw-earth-2011.png
description:
The 2011 State of Tooling for Semantic Technologies shows there are 1010 tools in the Sweet Tools listing, the first it has passed 1000 total tools. A total of 158 new tools have been added to the listing in the last six months, an increase of 17%
articleBody:
see above
datePublished:
December 12, 2011

3 thoughts on “The State of Tooling for Semantic Technologies”