Who Knew There was an Opposite Counterpoint to the Bucket List?

My next birthday will be my 70th. That is a surreal realization for a former Young Turk, now, apparently, an Old Fart. The grim circumstance of my age group over the past nearly two years is only sadly underlined by the fact that nearly half of my high school buddies are no longer with us. Covid is not the primary cause for these sad facts, but its constant presence is a reminder of our ultimate mortality.

However, for some, me included, getting to this age also means reduced income pressures, with some wealth and the ending of child rearing duties. Those fortunes mean having the freedom and time to pursue lifelong interests or new experiences. When combined with an awareness of pending mortality, these realizations led to the innovation of The Bucket List, made famous in the 2007 movie with Jack Nicholson and Morgan Freeman, playing two terminal patients pursuing their last desires. The Bucket List is for those things you want to do or accomplish before you kick the bucket.

I have to admit I have been thinking of the Bucket List of late. I got fascinated with the idea as I assembled up desired travel destinations or new activities like sailplaning or writing a novel. I was surprised that the Bucket List phrase itself, while mentioned a couple of places, really was not popularized until the movie. When talking about it with my family and how surprising the recent vintage of the phrase was, we decided to watch the movie again. We had not remembered well our first viewing. We enjoyed it tremendously with new insights and feeling the second time.  Jack and Morgan have immense chemistry and humor.

It was about this time that I replaced our wooden deck at home with one using the new plastic-wood composites. We have had our current house for 23 years, and every three or four years I had re-stained the deck, which is south-facing and much exposed to the sun. Emerging cracks and incipient decay had been pointing to the need for a full replacement for a few years now. I dreaded the prospect of the replacement — since I had a glimmer of how difficult it might be — but could put it off no longer as this summer approached.

The replacement was way more of a horror than I had expected. In order to retain the deck joists, which were still in good shape with no rot, I decided to remove the old decking and replace it with the newer composite. The old decking had been screwed into the joists with star (T20) screws. However, to remove the many hundreds of screws involved, each screw head needed to be re-exposed after decades of weathering and painting. Bent over on knee pads, each screw took minutes to be chiseled at and picked at in order to expose the star-shaped screw hole sufficient to hold a star bit to get purchase and back it out of the hole. Up-down, up-down, up-down hundreds of times with cracking knees and aching back! My gloved hands ached from the incessant picking and flecking of stuff in the clearing hole. I soon learned the need to use fresh picks and bits in order to hasten the slow process along. The installation of the hidden-connector system for the new composite decking was a chore in itself, but was an absolute breeze in comparison to picking out the holes on the screws. The hours I spent on this job exceeded by many times what I had dreaded from my initial estimates.

The hours I spent over those damn screws kept me muttering to myself, “Never again, never again.” With hours at hand and a mindless activity, I had little to think about except bucket lists and hateful screw holes. It was in one of these mindless states that it struck me that if one could assemble up a list of desired activities before one croaks, why can’t one also assemble a list of activities they will never do again? Replacing decking easily took the first position on my ‘never-do-that-again’ list.

I now had two different lists to think about and assemble while doing my screw-picking. I also kept ruminating on what is the right name for an opposite listing to the Bucket List. When enlisting my family to share in this rumination, it was my son-in-law, Adam, who came up with the label ‘f*ck-it list’. Not only did it rhyme with Bucket List, but it perfectly captured the spirit behind this negative list. Damn straight; f*ck it! Thanks, Adam!

I don’t think it is necessary (or even wise) for me to share all of the actual items on my Bucket List or F*ck-it List. As for the latter, I will say that some additional items on the list include not working for stupid clients again (smart clients are OK) and not moving my own furniture to a different residence. The decking prohibition has the honor of being the inaugural item. Never eating tofu again is also on the list. At 6’3″ with creaky knees, I also am contemplating adding to the list no longer flying internationally in regular economy seats.

Even at my ‘advanced’ age, I am fortunate to still have the cognitive wherewithal to handle two important lists. One good fortune of pending mortality is the freedom to pursue a relatively few things of great personal meaning and importance; that is, the Bucket List. Another good fortune is to avoid doing things that you have hated in the past; that is, the F*ck-it List. So, I say, it is OK to say f*ck-it as you continue to kick the bucket. For every Bucket List yin there is a yang deserving never to be done again.

Oh, and the deck? Well, I think it turned out rather nicely, don’t you? Which is a good way to either add or cross an item off a list, depending on your mode. I have had to suspend further development on the Cooking with Python and KBpedia series due to other work priorities. As a volunteer effort, CWPK unfortunately has to take a back seat when business calls.

My next volunteer activity will be the pending release of KBpedia v 300, itself built with the CWPK code. That may also trigger a re-start to this series.

Thanks for your patience. I’ll keep you informed of any plans. 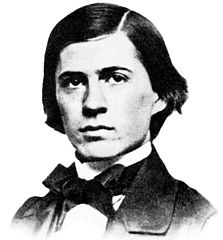 As of today, I have completed the release of all chapters and appendices separately as well as the full book of A Knowledge Representation Practionary. These free PDFs are the author’s preprint versions. Today’s release is of the full book. The AKRP page provides the specific links.

A Knowledge Representation Practionary is a major work on knowledge representation based on the insights of Charles S. Peirce, shown at age 20 in 1859, who was the 19th century founder of American pragmatism, and also a logician, scientist, mathematician, and philosopher of the first rank. The book follows Peirce’s practical guidelines and universal categories in a structured approach to knowledge representation that captures differences in events, entities, relations, attributes, types, and concepts. Besides the ability to capture meaning and context, the Peircean approach is also well-suited to machine learning and knowledge-based artificial intelligence.

Springer subscribers still have free access to the official version of the book in PDF form and for $25 can obtain a softcover, printed version. However, for all others, please refer to the AKRP page for access details on the preprint PDFs. 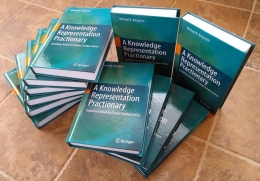 I Release the Final Chapters from A Knowledge Representation Practionary

I have completed the release of the final four chapters from my book, A Knowledge Representation Practionary, as free PDF downloads in the author’s preprint version. The preprints are the last complete version before final editing and formatting by the publisher.

In this release, I have completed the release of all AKRP chapters by adding: 5. The Precepts, 8. KR Vocabulary and Languages, 11. Knowledge Graphs and Bases, and 14. Testing and Best Practices.

Springer subscribers still have free access to the official version of the book in PDF form and for $25 can obtain a softcover, printed version. However, for all others, please refer to the AKRP page for access details on all of the preprint, free chapters. 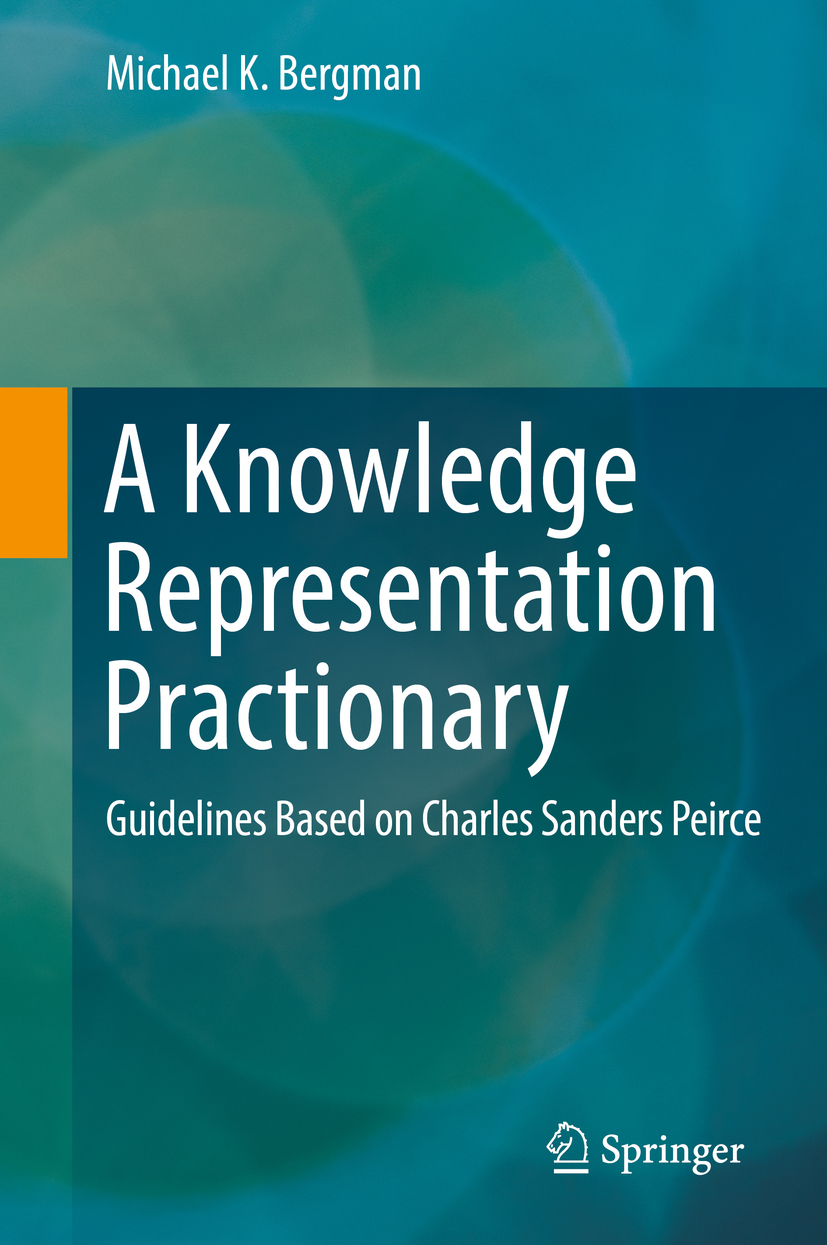 I have added five more chapters from my book, A Knowledge Representation Practionary, as free PDF downloads in the author’s (preprint) version.

In this latest release, I have added these chapters: 4. The Opportunity, 7. A KR Terminology, 10. Modular, Expandable Typologies, 13. Building Out the System, and 16. Potential Uses in Depth.

This latest release continues the process to release all of the book chapters in the author’s version. I welcome your feedback and comments.

Springer subscribers still have free access to the official version of the book in PDF form and for $25 can obtain a softcover, printed version. However, for all others, please refer to my standard AKRP page for updates on additional free chapters.