OWL 2 Has New Options; Useful to SKOS, Too

It is not unusual to want to treat things either as a class or an instance in an ontology, depending on context. Among other aspects, this is known as metamodeling and it can be accomplished in a number of ways. However, the newest version of the Web Ontology Language, OWL 2, provides a neat trick for doing this called “punning“. Why one would want to metamodel, how to specify it in an ontology, and why the OWL 2 approach is helpful are described in this post [1].

These lightweight, domain ontologies often have a hierarchical structure for which SKOS (Simple Knowledge Organization System) is a recommended starting ontology [2] (see best practices recommendations). A subject concept reference ontology such as UMBEL (Upper Mapping and Binding Exchange Layer) [3], which we also recommend, also has a similar structure and a heavy reliance on SKOS in its vocabulary. Because of these structural similarities, ontologies that use SKOS or UMBEL are therefore good candidates for using metamodeling techniques.

To better understand why we should metamodel, let’s look at a couple of examples, both of which combine organizing categories of things and then describing or characterizing those things. This dual need is common to most domains [4]. For the first example, let’s take a categorization of apes as a kind of mammal, which is then a kind of animal. In these cases, ape is a class, which relates to other classes, and apes may also have members, be they particular kinds of apes or individual apes. Yet, at the same time, we want to assert some characteristics of apes, such as being hairy, two legs and two arms, no tails, capable of walking bipedally, with grasping hands, and with some being endangered species. These characteristics apply to the notion of apes as an instance.

As another example we may have the category of trucks, which may further be split into truck types, brands of trucks, type of engine, and so forth. Yet, again, we may want to characterize that a truck is designed primarily for the transport of cargo (as opposed to automobiles for people transport), or that trucks may have different drivers license requirements or different license fees than autos. These descriptive properties refer to trucks as an instance.

These mixed cases combine both the organization of concepts in relation to one another and with respect to their set members, with the description and characterization of these concepts as things unto themselves. This is a natural and common way to express most any domain of interest. The practice has been to express these mixed uses in RDFS or OWL Full, which makes them easy to write and create since most “anything goes” (a loose way of saying that the structures are not decidable) [5]. Use of sub-class relationships also enables tree-like hierarchies to be constructed and some minor inferencing (such as one concept is broader than another concept, one of the contributions of SKOS). But such mixed uses do not allow more capable OWL reasoners to be applied, nor for the full power of query or search abstraction to be applied, nor for the ontology to be checked for consistency. These limits may be fine in many circumstances, but their lack does allow structures to evolve that may become incoherent or illogical. If data interoperability is a goal, as it is in our enterprise use cases, incoherent ontologies can not contribute or participate as structures to linking datasets. At most — and this is the case for much linked data practice — all that can be done is to make explicit pairwise connections between different dataset objects. This is not efficient and defeats the whole purpose of leveraging schema.

OWL 2 has been designed to fix that (in addition to other benefits [12]). The approach taken by OWL 2 to overcome some of these metamodeling limitations is through “punning” [6]. Recall that objects are named in RDF with URIs (IRIs in OWL 2). The trick with “punning” is to evaluate the object based on how it is used contextually [7]; the IRI is shared but its referent may be viewed as either a class or instance based on context. Thus, objects used both as concepts (classes) and individuals (instances) are allowed and standard OWL 2 reasoners may be used against them. It should be noted, however, that this “punning” technique does not support the full range of possible metamodeling aspects [8]. Like any language, there is a trade-off in OWL 2 between expressivity and reasoning efficiency [9].

But, for lightweight, domain ontologies where the objective is interoperability across heterogeneous sources — that is, namely the main objectives of the semantic Web or semantic enterprise — this trade-off in OWL 2 now appears to be well balanced. Moreover, its automatic detection by tools such as Protégé 4 that use the OWL API also means it is comparatively easy to use and implement.

An earlier chapter in this series presented some best practices for ontology building and maintenance. A fundamental aspect of those recommendations was the desirability of keeping instance data (ABox) separate from the conceptual structure (TBox) that provides the schema of relationships for those concepts [10]. Fortunately, this approach also integrates well with the metamodeling capabilities in OWL 2. How metamodeling and the ABox-TBox split is accommodated is shown by this diagram, using trucks as an example: 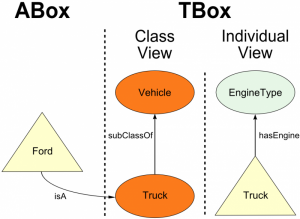 The right-hand side of the diagram shows the two views possible via OWL 2 metamodeling in the TBox. In some cases, we may speak of trucks as a class of vehicle, to which individual members may belong; this is the class view. In other contexts, we may want to characterize or make assertions about trucks in our ontology, such as asserting cargo transport or engine type, in which case truck is now represented as an instance (individual) under the individual view. These two views in the TBox represent our structural and conceptual description (the “world view”) regarding this domain of which vehicles and trucks are a part. Then, when we begin to populate our knowledge base with specific data, we do so via the ABox. In this example, as we add data about the specific brand of Ford trucks and their attributes, we link the Ford instance to the TBox via the Truck class. (Best practice also requires that we model this new attribute structure into the TBox as well, but that is a different topic. 😉 .)

How Punning is Triggered in OWL 2

Any entity declared as a class and with an asserted object or data property [15] is punned (metamodeled).

This test is done directly by the OWL API [7]. You can go ahead and test this out with an OWL 2-compliant editor, such as Protégé 4. Here is an example test (in N3 notation): First, begin with some initial declarations:

Then, let’s describe an object property:

And define and make an assertion about Apes:

Now, the system begins by testing for punning and other checks, such as:

In this case, no inconsistencies were found. But, let’s now add another object (non-annotation) property:

And use it to expand our assertions about Apes:

Now, inconsistencies are raised in the second #3: So, the consistency check fails, because Ape can not be both an Animal and a Car. While this is clearly a silly example, such checks are quite important as the number of objects and assertions grows in an ontology.

The punning technique works because the IRI for the object ends up being treated as both a concept (class) and an instance (individual). Thus, while the object shares the same IRI, depending on its context, it is evaluated by an OWL reasoner as a different thing (class or individual). The OWL API achieves this by actually writing out the object in both its class view and individual view. Here is an example (in RDF/XML serialization): Input OWL:

Output from Protégé with punning:

Notice the duplicate definition (in RDF/XML) to the NamedIndividual. When writing out the ontology, all punned objects are duplicated in a similar manner.

The Beginning of the Transition

OWL 2 and its other general changes [12] have arrived in the nick of time. Not only were we seeing some of the weaknesses in OWL 1 that warranted updating, but we are also now being challenged with regard to how to make linked data and the many datasets in RDF effectively interoperate. Perhaps undecidability and throwing triples to the wind worked OK in the early days of our semantic Web Wild West. But now it is time for the new sheriff to bring order to the emerging chaos. Of course only time will tell, but we believe the design decisions made by the OWL 2 working group were judicious and balanced ones to find that sweet spot between expressiveness and reasoning efficiency [9]. We also believe that, while useful in its less expressive form [2], that many new domain vocabularies based on SKOS would especially benefit from embracing the OWL 2 metamodeling techniques. But two criticisms still remain. First, tooling support for OWL 2 and the OWL API is weak, as discussed in an earlier chapter. And, as the last chapter discussed, there are not enough practitioners that have yet taken up OWL 2, which means that best practice guidance and exemplars are still limited. Lightweight domain ontologies can greatly benefit from these OWL 2 metamodeling techniques and the OWL RL alternative that also emerged as one of the OWL 2 profile enhancements [13]. Structured Dynamics thinks the growing scale and learning taking place around linked data and RDF datasets is now pointing the way to a necessary transition. And OWL 2 metamodeling should be one of the key components to making our semantic technologies more responsive and effective [14].

[13] OWL RL is the “rules” profile of OWL 2 and is both decidable and offers additional axiomatic support for metamodeling. As this figure drawn from Hoekstra [Fig. 3-4 in 5] shows comparing OWL 2 to OWL 1, OWL RL provides a subset of decidable description logics:
[14] Metamodeling might be a new concept to you and some of the aspects can certainly be academic. If the references above do not sufficient satisfy your curiosity, you may want to check out some of these other useful references: Birte Glimm, Sebastian Rudolph and Johanna Völker, 2009. “Integrated Metamodeling and Diagnosis in OWL 2,” see http://www.comlab.ox.ac.uk/files/3129/paper.pdf; and Nophadol Jekjantuk, Gerd Groener and Jeff. Z. Pan, 2009. “Reasoning in Metamodeling Enabled Ontologies,” in Rinke Hoekstra and Peter F. Patel-Schneider, eds., Proceedings of OWL: Experiences and Directions (OWLED 2009); see http://www.webont.org/owled/2009.
[15] In OWL 2, an object property is a predicate that defines a binary relationship between two objects (in specific respect to a triple, between a subject and an object). A data property is a predicate that defines a binary relationship between an object an a literal (string or data value). In contrast to object and data properties, annotation properties and reserved OWL and RDF vocabularies are explicitly excluded from this rule. Only declared object or data properties trigger the punning.

headline:
Metamodeling in Domain Ontologies
alternativeHeadline:
OWL 2 Has New Options; Useful to SKOS, Too
author:
Mike Bergman
image:
http://www.cs.berkeley.edu/%7Esequin/GEOM/TILES/LizardTetrus1.JPG
description:
It is not unusual to want to treat things either as a class or an instance in an ontology, depending on context. Among other aspects, this is known as metamodeling and it can be accomplished in a number of ways
articleBody:
see above
datePublished:
September 20, 2010

4 thoughts on “Metamodeling in Domain Ontologies”