We first began publishing interactive electronic notebooks for this Cooking with Python and KBpedia series in CWPK #16, though the first installment using a notebook started with CWPK #14. I had actually drafted all of the installments up to this one before that date was reached. Since one major purpose of this series was to provide hands-on training, I did not want to force those who wanted to experience some degree of interactivity to have to go through all of the steps to set up their own interactive environment. My hope was that a taste of direct involvement with the code and interactivity would itself encourage users to get more deeply involved to establish their own interactive environments.

I had encountered for myself fully interactive notebooks prior to this point, ones where all I needed to do was to click to operate, so I knew there must be a way to make my own notebooks similarly available. In order to achieve my objective, as is true with so much of this series, I was forced to do the research and discover how I could set up such a thing.

A Survey of the Options

In researching the options it was clear that a spectrum of choices existed. We have already discussed how we can create non-interactive mockups of an interactive notebook using the nbconvert option or converting a drafted notebook using Pandoc (CWPK #15). My research surfaced some additional options to render a notebook page for general Web (HTML) display:

These options are helpful, of course, but lack the full interactivity desired.

Systems that allow code cells to be run interactively are obviously more complex than nice rendering tools. My investigations turned up a number of online services, plus ways to set up own or private servers. From the standpoint of online services, here are the leading options:

There is a Python option that does not provide complete interactivity, but simple interactions of certain aspects of certain notebook cells:

Then, there are a series of online services:

The other interactive approach is to not use an established service, but to set up your own server.

Frankly, most of the own-server options looked to be too much work simply to support my educational objectives for the CWPK series.

I was very much committed to have an online service that would run my full stack. I chose to implement the MyBinder option because I could see it worked and was popular, it had close ties to Jupyter and rendered notebooks the same as when using locally, was free, and seemed to have strong backing and documentation. On the other hand, MyBinder has some weaknesses and poses some challenges. Some of the key ones I knew going in or identified as I began working with the system were:

Some of these issues deserve their own commentary below.

Setting Up the Environment

Setting up a new instance at the MyBinder service is relatively straightforward. Here is the basic set-up screen on the main page: 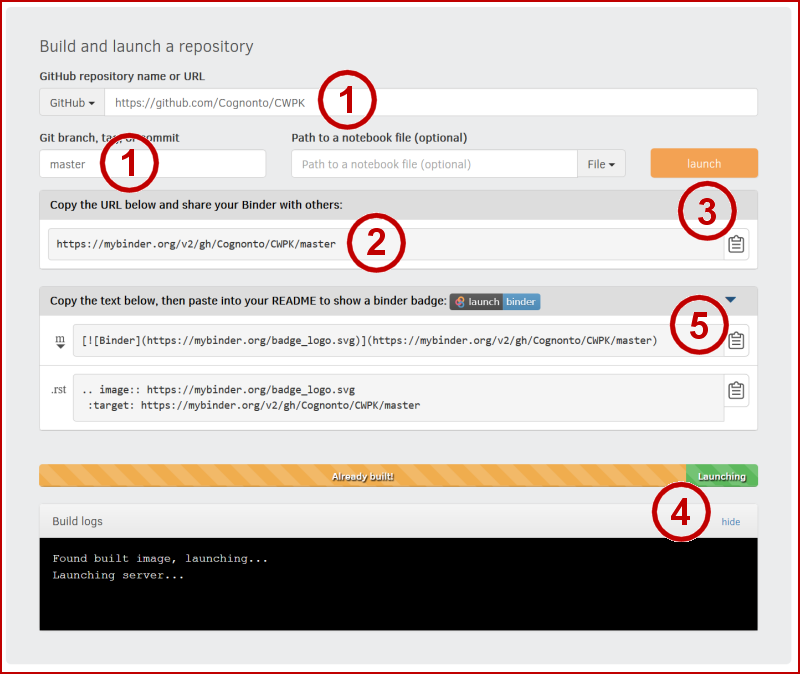 One must first have a Git repository available to start the service. One also needs to have completed an environment configuration file (environment.yml in our case with Python) and a project README.md at the root of the master branch on the repo. In our case, it is the CWPK repository on GitHub; we also indicate we are dealing with the master branch (1). (I had some initial difficulty when I over-specified a link to an individual notebook page; removing this cleared things up.) These simple specifications create the URL that is the link to your formal online project (2). Upon launch (3), the build process is shown to screen (4), which may take some minutes to build. The set of working input specs also provide the basis for generating a link badge you can use on your own Web sites (5).

Upon completion of a successful build, one is shown the standard Jupyter Notebook entry page.

Here are two additional resources useful to setting up a MyBinder application for the first time:

Though set up is straightforward, there are some challenges in implementing MyBinder to accommodate specific CWPK needs. Here are some of the major areas I encountered, and some steps to address them.

As has become obvious in our series to date, Python is a highly configurable environment, with literally tens of thousands of packages to choose from to invoke needed functionality. The standard environment settings appear to do a good job of allowing new packages to be specified and imported into the MyBinder system. I had confidence these could be handled appropriately.

My major concern related to CWPK‘s own cowpoke package. At the time of starting this effort, this package was not commercial grade and was not registered on major distribution networks like PyPi or conda-forge. When used locally, including cowpoke is not a big issue: we only need to include it in the local listing of site packages. But, once we rely on a cloud instance, how can we get that code into our online MyBinder system?

The answer, it turns out, is to package our code as one would normally do for a commercial package, and then to include a setup.py configuration file in our local specification. That enables us to invoke the package through the standard MyBinder environment configuration. See especially this key reference and this stub for setup.py.

Until this point, I had been developing and refining a local file directory structure in which to put different versions of KBpedia, other input files, and example outputs. This system was being developed logically from the perspective of a local file system.

However, these files were local and not exposed for access to an online system like MyBinder. My first thought was to simply copy this structure to the GitHub repo. But the manual copying of files to a version control system is NOT efficient, and the directory structure itself did not appear suitable for a repo presence. Further, manually copying files presents an ongoing issue of keeping local and remote versions in sync. Moreover, as I began adding new daily installments to the GitHub repo, I could see in general that manual additions were not going to be sustainable.

These realizations forced two decisions. First, I would need to re-think and re-organize my directory structures to accommodate both local and repo needs. The directory structure we have developed to date now reflects this re-organization. Second, as described in the next section, I needed to cease my manual use of GitHub and fully embrace it as a version control system.

I have to admit: Every time I try to work with version control with Git, I have been confused and frustrated with how to actually get anything done. I have, hopefully, progressed a bit beyond this point, but I would caution some of you looking to move into this area that you may have to overcome poor documentation and obfuscated instructions and commands.

So, I will not divert this series to deal with how to properly set up a Git-based version control system. In brief, one needs to establish a Git repository, and on Windows set up a Git client and then (for me), set up TortoiseGit if you want to work directly in Windows and the File Explorer rather than from the command line. In the process of doing all of this, you will also need to set up a key-based access control system with PuTTy (puttygen) so that you can communicate securely between your remote instance and your local file system. These steps are more effectively described in the TortoiseGit manual or various tutorials of one aspect or another. Installation, too, can be difficult with regard to general aspects or the PuTTy keys.

The reason, of course, for accepting this set-up complexity is being able to make changes either on a local version of code or data or a remote version of the same. This is the essence of the definition of keeping systems in ‘sync’. After having worked with these systems now for some weeks, daily, I think I can offer some simple tips for how best to work with these version control systems, points which are not obvious from most written presentations:

Always make sure that as any changes are made, at either side, they are synced to the system. In this way, you can be assured that your version control system is in a stable state, and you are free to make changes on either the local or remote side. Also know you can use GitHub for keeping multiple local instances (a desktop and a laptop in my case) in sync with the remote repository. Simply follow the above guidelines for each instance.

If you recall the discussion in CWPK #15, there is a difference in where custom styles can be set when viewing notebook pages locally versus whether they are called up directly from Python. Now, as we move to an online expression of these notebooks, we again raise the question of where online custom styles can be invoked.

Perhaps in some expressions, where style overrrides can be invoked is a matter of little consequence. But this CWPK series has some specific styles in such things as pointing to warnings, pointing to online resources, etc. Having a consistent way to refer to these styles (presentation) means better efficiency.

My hope had been that with MyBinder we had some identifiable means for providing such custom.css overrides as well. Though I can see links to such in page views, and there are hints online for how to actually modify styles, I was unable to find any means for effectively doing so. My suspicion is that online interactivity such as MyBinder is still in its infancy, and the degree of control that we expect in either local or remote environments is not yet mature.

Thus, since I could find no way after many frustrating hours to provide my own specific styles, I had to make the reluctant decision to embed all such style changes in each individual notebook page. (What this means, effectively, is the specific statement of style attributes needs to be repeated each time as used [MyBinder does not support referring to a style name in a separate external file, which is the more efficient alternative].) This embedded approach is not efficient, but, like prior discussions about the use of relative addresses, sometimes being specific is the best way to ensure consistent treatment across environments.

As time has gone on, I now have learned a general workflow that reflects these realities. In general, thus, with each new CWPK installment I try to:

Though it is not designed directly as such, it is also possible to analyze use of MyBinder and gain statistics of use.

headline:
CWPK #57: Publishing Interactive Notebooks
alternativeHeadline:
Notebooks are Only Interactive if You Share
author:
Mike Bergman
image:
https://www.mkbergman.com/wp-content/uploads/2020/07/cooking-with-kbpedia-785.png
description:
We investigate alternatives for sharing the interactive electronic notebooks from this 'Cooking with Python and KBpedia' series and settle upon the MyBinder option. We then discuss how to set up, configure and then publish our notebooks for sharing using this free, online MyBinder service.
articleBody:
see above
datePublished:
October 22, 2020