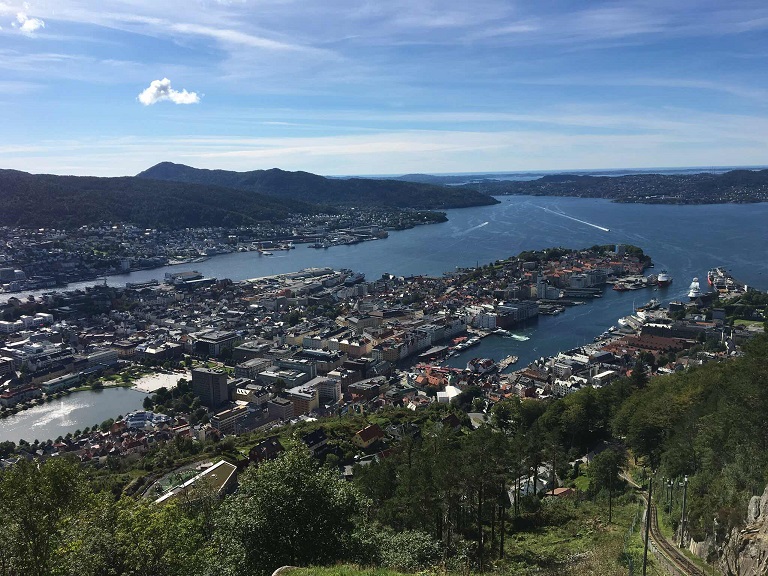 I have spoken of my wife, Dr. Wendy Maury, a couple of times on this blog. She is a professor of virology in the Department of Microbiology at the Medical School of the University of Iowa, at which she has steadily climbed the rungs over her twenty-year tenure. She has had a successful career, attaining full professorship about a decade ago, while enjoying much publication and research funding success. One of the highlights of her stay was being able to teach our son, Zak, while he was a med student at the medical school. Both of our kids and their spouses are now nearly through their medical residencies. Both kids were greatly influenced by their mother’s passion for science and learning about human diseases.

Watching Wendy over the years I observe it is hard to find time away when one runs a wet-bench laboratory with many students and technicians. There are also grants to write and papers to write and all that comes with teaching and mentoring and peer review and service activities in a university. So, it was something of a surprise when Wendy posed the idea of taking a sabbatical in Norway. We had talked of the possibility many times, but both of our demanding jobs seemed to keep the prospect on the unreachable horizon. And, of the places we had discussed, Norway had not been on the list. 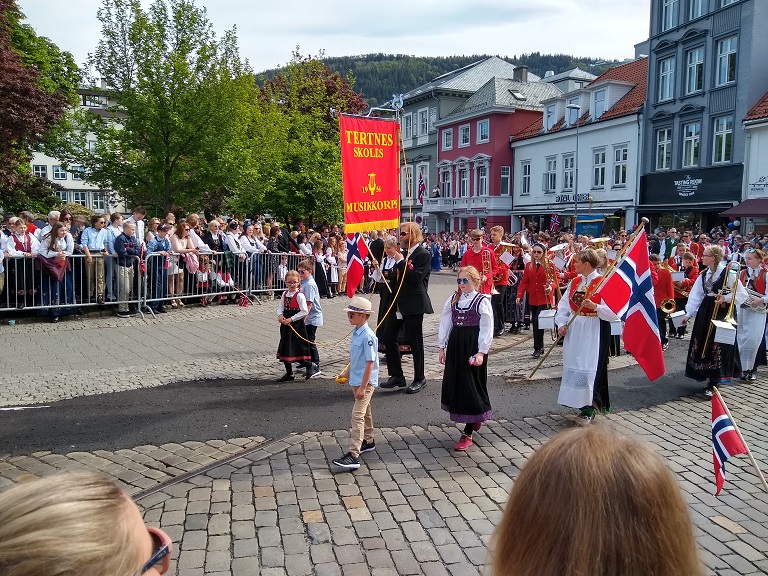 But a colleague of Wendy’s, Dr. James Lorens, had some unique instrumentation and techniques of direct relevance to her interests and a nice set of labs at the University of Bergen. Jim had actually grown up for a time in Iowa City so knew the U of Iowa well. Before we knew it, we had committed to a nearly half-year stay in Norway, where Wendy would accept a temporary position in Jim’s labs at UiB (Universitetet i Bergen).

From that decision in the Fall of 2018 we had about six months to wrap up our stateside activities and get ready to live in a foreign country. That is not an unusual activity for thousands of research and work vagabonds, but it was new for us. We had to shut down two residences, get visas, and make all of the sundry arrangements required for such lengthy stays.

We arrived in Bergen in mid-May, just in time to experience Constitution Day, the most venerated holiday in Norway. Everyone in Bergen — as throughout Norway — dresses in their best finery, including dark suits for the men and traditional dress (bunad) for the women. Parades, marching and drumming, singing, and carousing signal this proud country’s joy and pride of independence. Locals told us they had not seen such glorious sunshine and weather on this day for decades prior. The celebrations were indeed a unique introduction to this proud culture. Fireworks at 11 pm while it was still light caused a phalanx of startled seagulls to stream out from the city center over our house. Drummers and singers passed by our house for some hours after. (I find this drumming business kind of cool, with seemingly at unpredictable times organized groups to single drummers banging martial beats across our nearby park or through town.) 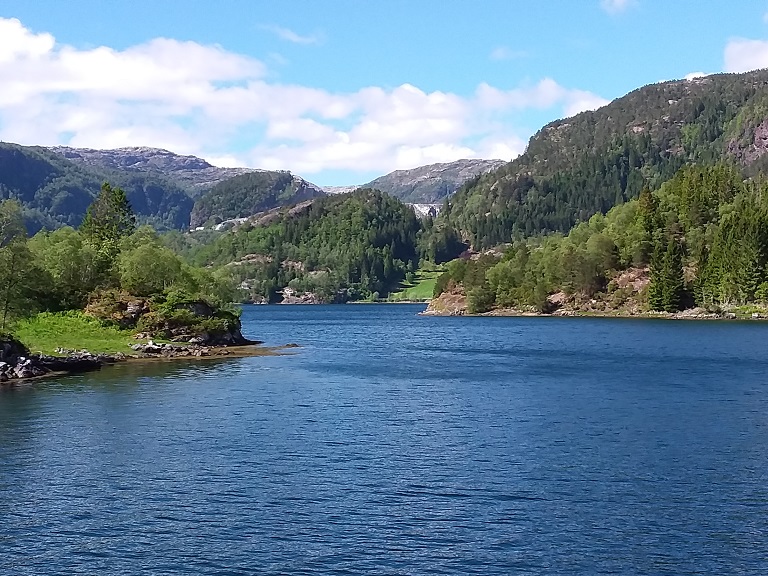 We’ve been here now a month, and I totally love Bergen and its people. Norway is perhaps the wealthiest country in the world, and the people are well educated, sophisticated, and nearly all speak English. The people are happy, ready to break into song at any excuse, and friendly, though not gregarious to strangers. It is an expensive country on all fronts, from eating out to transportation and housing. There is a wealthy class, but class differences seem small. Service staff appear to be well compensated, one of the reasons, I’m sure, for why general costs for everything are high. The Norwegian sovereign fund from the country’s North Sea oil revenues have been wisely invested. The infrastructure in this country is the best I have seen anywhere, is modern, and very tastefully designed. 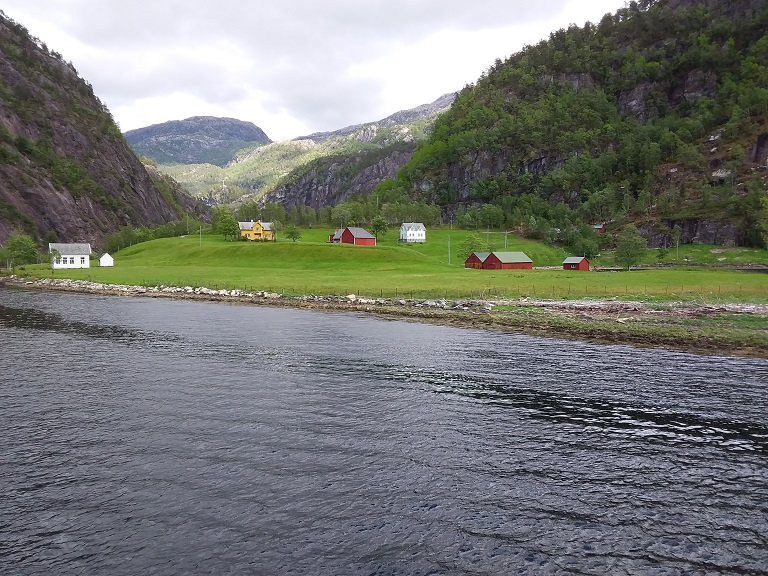 Bergen is the second largest city in Norway, with about 420,000 people in its greater metropolitan area. It is a maritime city with a climate moderated by the adjacent Norwegian current. Bergen is the gateway to Norway’s fjords, so is also a destination for day cruises, mountain hut hikes, and cruise ships (though those stay down in the harbor area, and are not generally obvious in town). The University of Bergen is a major resource, and students and cultural activities abound. There has been a constant stream of music festivals from classical to rock since we have been here. Last weekend, for example, we saw Mark Knopfler at the 13th century Bergenhus Fortress, which was a spectacular concert at a most unique outdoor venue. 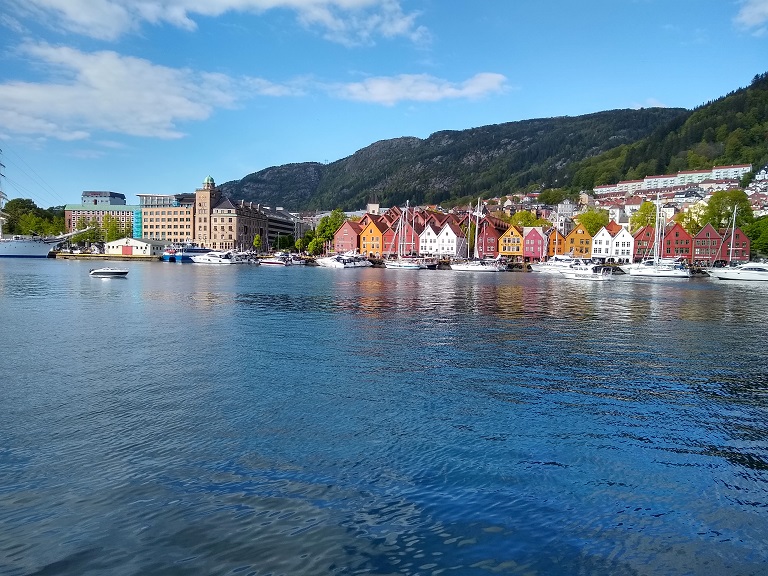 Bergen is nestled in an interlocking series of inlets and fjords with water and islands dotting the meandering paths to the North Sea. The city is surrounded by seven mountains — sites for a famous local daylong hike crossing all peaks by the intrepid, which took place a couple of weeks back — with the two highest easily accessed via the steep Fløyen funicular (inclined tramway) or a gondola ride up to Mt Ulriken. Local transporation is excellent and clean and efficient, including bus and light rail. The city wisely taxes cars heavily with throughways well segregated from living spaces. Traffic and parking congestion is non-existent. It is the most walkable and liveable city I have experienced.

Bergen’s combination of water and mountains and green vegetation and summer light leads to a gorgeous environment. Combined with the historic buildings, including the picturesque Bryggen heritage site from the period of the Hanseatic League down at the harbor, there is a beauty to the place that is world class.

With the maritime climate comes rain, which we have seen about half of our days here. For only a couple of hours in early morning could one say it is dark outside, but even on rainy or cloudy days there is generally some break in the clouds with blue sky. About half of the days have been warm and sunny and totally stunning. 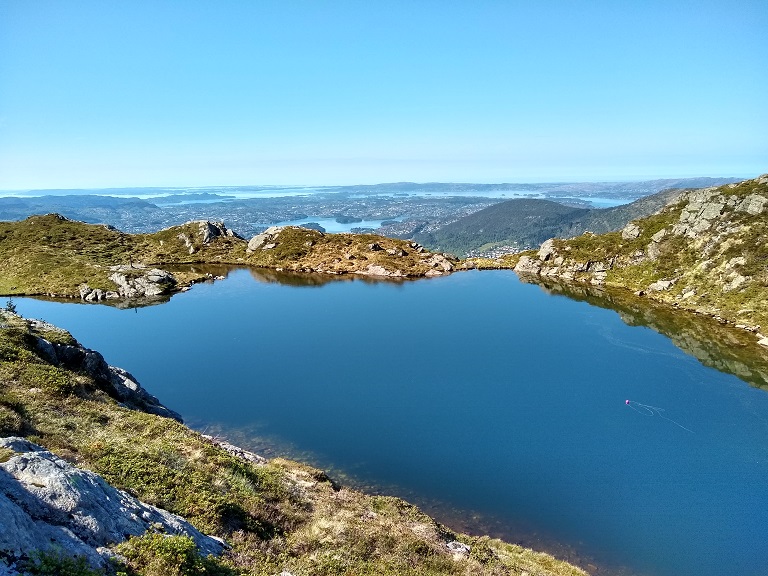 The university here has graciously provided a garret apartment in a wonderful house for us to live, right in the center of town next to beautiful Nygårdsparken. To avoid the high cost of restaurants, I experience the high cost of groceries as I shop the local marts daily for our dinner. It has been fun to learn about local foods and differences from the standbys from home. Since I do all of our family cooking, and have for decades, I get to experience all of the shopping variety that our new home provides. It is enjoyable and a hoot, though sometimes the localvore experience can be a challenge to create the meals I contemplate. 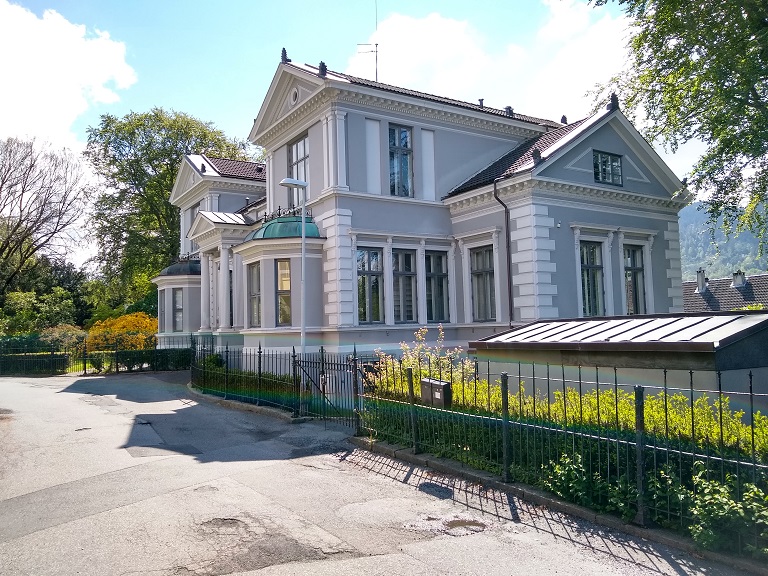 Wendy’s work is proceeding well, and my own plans for the stay here were to study and research for a new book I am starting. However, it turns out that there is cutting-edge semantic technology and AI work taking place at the university, and I have already given a seminar and begun some collaborations. I have been pleased to meet and have great discussion with Andreas Opdahl, Csaba Veres, and Enrico Motta (temporary appointment from The Open University). There is also a vibrant startup community here doing AI and semantic technologies, including Wolftech and Mjoll. Media is a particular emphasis for these startups.

Bergen also provides a nice jumping off point for travel, especially to Northern Europe. Wendy and I have many trips planned (and some already taken) both to other countries and throughout Norway, We visited Oslo last weekend, and we somewhat duplicated the famous ‘Norway in a Nutshell’ trip on our own. We will continue this cycle of work in Bergen and adjacent travel until our return to the United States in October. 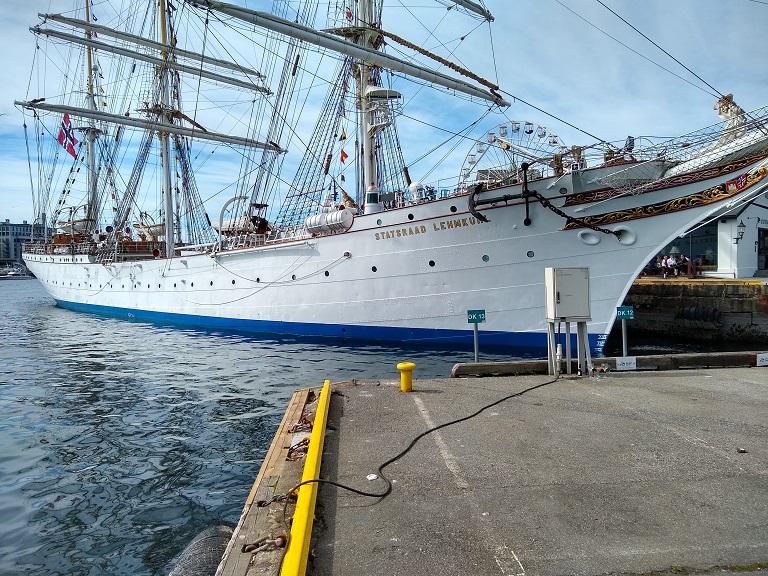 I think I may have had a glimmer of awareness that there was a place called Bergen in Norway a year ago. I generally consider myself to know a bit of the world and have kept many places on a desire-to-visit list. Yet Bergen was not one of them. Our experience so far just goes to show how little we know of the world and its wonders and glorious places. It also shows how being open to new experiences and challenges can bring surprising and unanticipated rewards.

I may post other updates about our experiences as the summer goes on.

headline:
Beguiled By Beautiful Bergen
alternativeHeadline:
Enjoying our first sabbatical
author:
Mike Bergman
image:
http://www.mkbergman.com/wp-content/themes/ai3v2/images/2019Posts/bergen-overview.jpg
description:
My wife, Wendy Maury, and I are spending nearly a half year in beautiful Bergen, Norway, on sabbatical. I describe herein our first impressions of this wonderful city and its friendly people.
articleBody:
see above
datePublished:
June 17, 2019

One thought on “Beguiled By Beautiful Bergen”