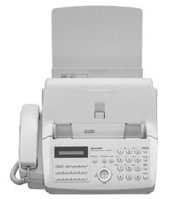 Technology has Advanced, but the Experience is Much the Same

Over that period of time I have had five companies, lived in four states, have worked either alone or have run companies with up to 35 employees, raised millions in financing, and have mostly continued to move in (I hope) a forward direction. In the early years, I literally commuted between Montana and Washington, DC. Now, I rarely travel. My current company, Structured Dynamics, is pretty simple with low overhead — by design.

In the beginning, it was really not that easy being an independent teleworker. Technology, culture, and practices were very much different than today. In the beginning, I was actually asked to speak to groups about what it was like to be a teleworker from home. The fax machine was the key enabler for us early teleworkers. But the fax was merely the first expression of sending content digitally over phone lines, the same basic model that applies today albeit with many advances. Fortunately, it has been at least ten years since technology was a real challenge in being able to work from home.

Running a company of more than a few individuals (remotely or local) is still perhaps a stupid approach when working from home. The times that I did have remote workforces — true for two of my companies — I tried to compensate by much travel and presence. But, honestly, I don’t think a remote boss can ever really work that well, for either the boss or the employees. Key workers or partners can work well from home, but not someone charged with leading and also setting broader culture in an organization with more than a few employees.

In 1989 I had been working in downtown Washington, DC, for nearly ten years when I decided to head out on my own. We were getting close to having our second child and we had realized the metro DC area was not the place we wanted to raise our children. My wife, now a biomedical professor, had just embarked on her own career that had limited choices as to institution and location. Working on my own and being my own boss seemed to provide the flexibility that we would need to best meet the needs of two professionals and our family. Though I started my initial energy consulting business in DC right as Zak was born, we shortly thereafter moved to Hamilton, MT, for the second of my wife’s post doctoral positions. We designed our new home with explicit attention to my office and work situation. 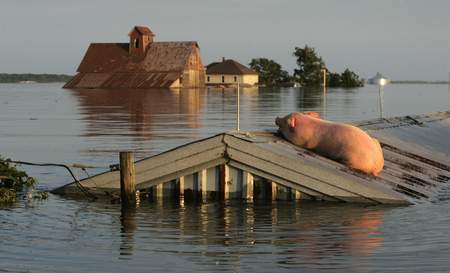 The nexus of my original energy consulting was DC (and other national locations), which caused me to travel up to 150,000 air miles annually during the early years. I literally went through a case of thermal fax paper each month to keep current with my clients and partners. In rural Montana I was quite the anomaly; most of my plane telecommuters were celebrities like Huey Lewis or Andie MacDowell, frequent co-travellers on my flights out of Missoula. Local civic groups often asked me to speak on what it was like to be a telework pioneer. I continued this for nearly five years, when I decided that software trumped straight consulting. By the time of our next move to Vermillion, SD, my transition to software was complete.

Vermillion was the locus of my first multi-employee company, VisualMetrics. All of that company’s employees worked from home. Staff meetings were conducted in a converted basement meeting room at my house. Our company sweatshirts celebrated the beginnings in the basement.

That effort was the springboard to starting up another company, BrightPlanet, which extended our employee reach to Sioux Falls, SD. Soon after that founding, my wife was recruited to a bigger medical school at the University of Iowa, which caused us to move to Iowa City, IA, fifteen years ago. We have been here ever since. Both of my kids graduated from the local West High School and then went on to college and their incipient careers.

For half of this period I kept my relationship with BrightPlanet, frequently making the seven-hour drive to Sioux Falls. That was probably the most difficult period of my teleworking tenure, since the company came to have many employees and the drive was pretty exhausting.

By 2006 I returned to consulting, and then was recruited to Zitgist and then formed Structured Dynamics with Fred Giasson. With the start of SD, travel began again. One of the more notable memories of that period was trying to get to a meeting in NYC after the Great Flood of 2008. I earlier wrote about that waterlogged event. I find a pig floating across the Iowa countryside to be an apt image.

Some Observations About Telework

Teleworking has both confirmed (and exceeded) certain expectations I had going in, while also seeing some surprises. Some of this I earlier documented in a twenty-year retrospective. 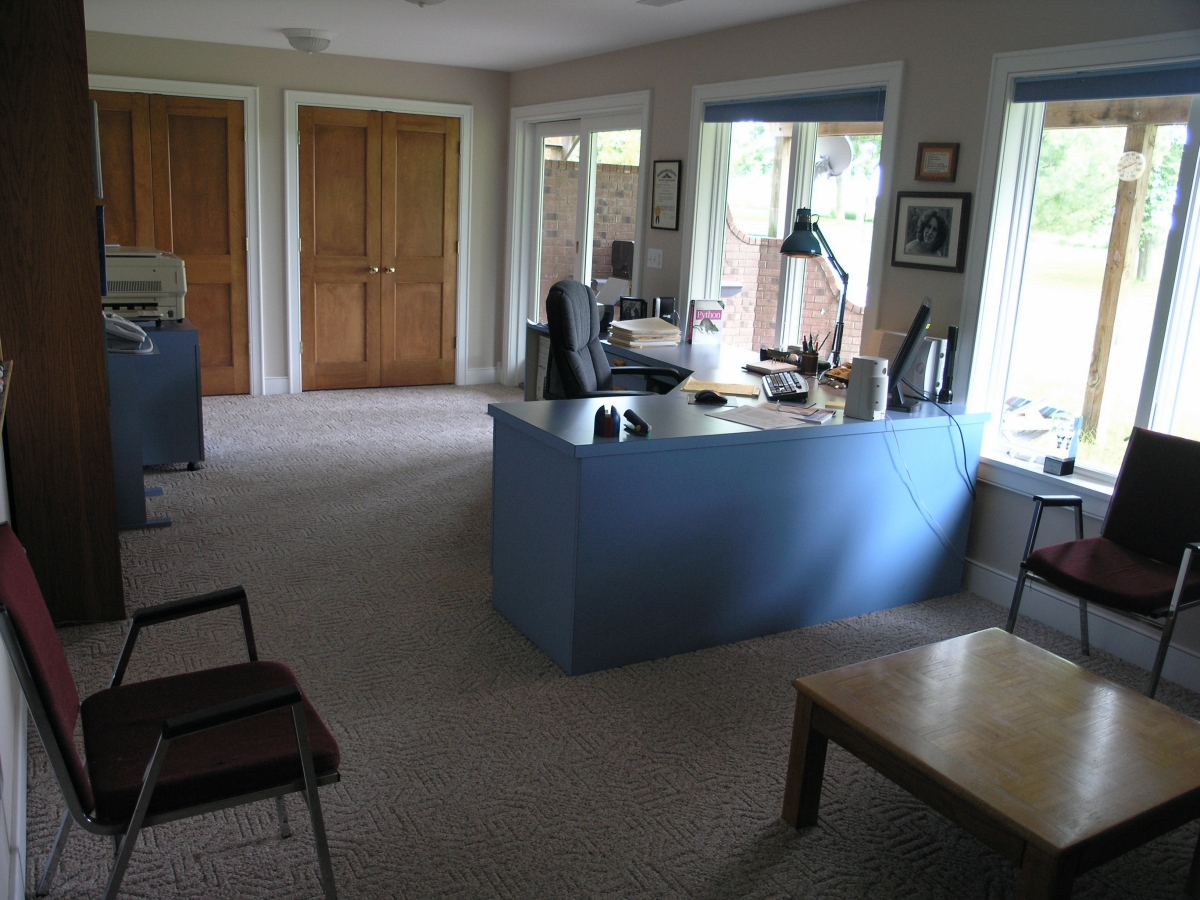 On the expectations front, I knew that I would gain more useful time during the day by avoiding the commute, which was 90 min total for me in DC. What surprised me, however, was the additional time I gained by not needing to keep home and office systems synchronized. Early on, I found I had gained about two hours of time each day in avoiding commuting and coordination activities! Not bad; not bad at all.

My initial experience in DC working from a converted bedroom also convinced me that it was important to have a space separate from the actual living space. Though I also used a converted bedroom in Vermillion, in my other two locations I have designed specific office spaces, somewhat physically removed from the general living space in the home. Two of the other pictures in this piece show my current office in Iowa.

Planning office space in advance means you can tailor the space to your work habits. For me, I want lots of natural light, a view from the windows, and lots of desk and whiteboard space. I also needed room for office equipment (copiers in the early years, fax, printers and the like) and file cabinets. When in Montana, I designed up and had built my own office furniture suite; I have kept that furniture with me ever since.

Teaching myself and the kids that office time and office space were fairly sacrosanct was important, too. Sure, it was helpful to be around for the kids for boo-boos and emergencies and dedicated kid’s time, and to be able to be there for home repairs and the like. But, for the most part, I have tried to treat my office as a separate space and to have the kids do so, too, though this is no longer applicable now that the kids are on their own. While growing up, I think this separation of space became natural to the kids and the family, and my office has always been viewed as mostly separate, though the door has never been closed or locked. 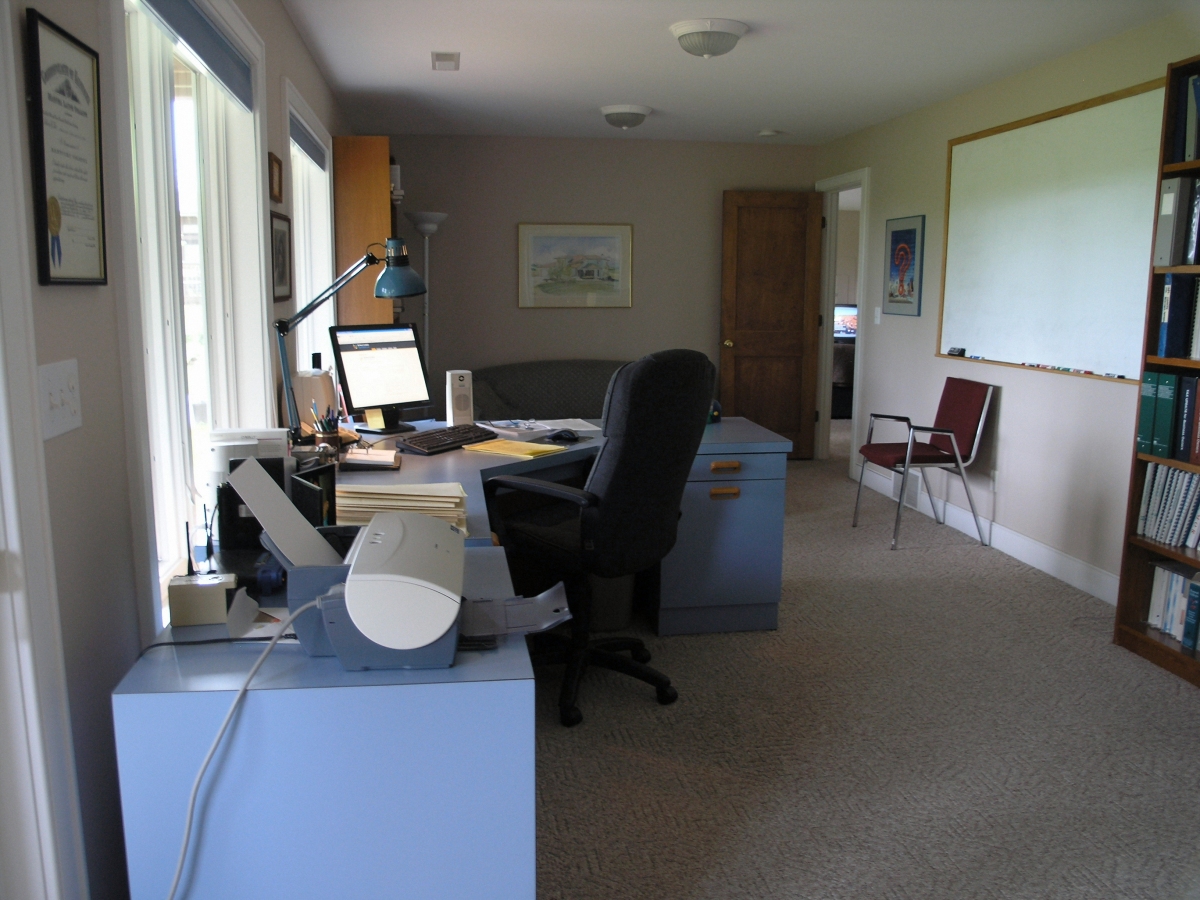 I never eat in my office and do not have a television or other distractions. I try to keep regular hours. I treat my office as such, and keep family and home activities distinct. Through the years the biggest challenge has been to not allow the ease of “going into the office” to take over my life. Frankly, I have not always kept this balance, since I have always loved my work and it is also one of my main hobbies and source of intellectual stimulus.

The biggest surprise over my tenure of working from home has been the Internet and what it has brought to make telework easier. It took a few years from the mid-1990s for this potential to show itself, but it is now so evident as to be unremarkable. All of the advantages that have been brought by cloud computing have caused home work to have nearly the same advantages of a standard work office. Teleworkers can share, collaborate, create, obtain and research equivalently to what a standard office worker may do.

Another pleasant surprise is the decline in meeting demands. Meetings, which are only occasionally essential, require either travel or greater planning in advance in the telework circumstance. Otherwise, it is great to avoid the all-too-frequent office meetings, most of which are tremendous time suckers and black holes for productivity.

Because so much can be done digitally, my general office expenses have continued to decline. Fax and copies are now rarely required. A single Internet line provides email, computing, streaming media, and VOIP benefits. I no longer need to replace my office computer each 2-3 years, and what little office equipment I need (multi-function, etc.) has also dropped greatly in cost.

Another major surprise has been the orders of magnitude reductions in what it takes to start up a new business, especially one based on software. Legal forms and incorporation are now almost commodities. Open source software means new applications and platforms may be assembled much quicker and at much reduced cost. In my early efforts, it was next to impossible to start up a software venture without substantial cash reserves in the bank or some form of external financing, even if just from angels. These efforts used to take tremendous time and effort, and represented a significant overhead cost to actually getting product produced. These impediments have now been largely swept away. (Though external financing still may be useful for marketing and scale-up.)

Wondering About Where Work is Heading

Of course, telework is not for everyone. It applies mostly to knowledge work, and where constant interaction or collaboration is not the norm. Individuals who need much social interaction or who are not pretty disciplined or self-starters would find working from home difficult and perhaps unfulfilling.

But the same trends that are making telework easier are also changing the nature of the standard knowledge workforce. One wonders if the heyday of the corporation, made infamous in the 1950s by the gray flannel man, is not an institutional phenomenon in slow decline. Even larger corporations are moving towards mobile workforces and virtual or temporary offices for their knowledge workers (despite Yahoo’s banning of telework).

It used to be (and still somewhat largely is) the case that the attraction of the “city” was in pulling together smart and innovative people in close proximity. Though some of these attractions will never go away, those attractions come at a cost in higher costs of living, congestion, crime and sensory assault. The Internet is enabling virtual and specialized communities to form, some of which due to their niche attractions, may not even be easily sustainable in cities.

We sometimes laugh that we have retreated to an Ozzie and Harriet-like circumstance of safe neighborhoods, great public schools, and a sense of balance and local community. We live in a bucolic spot, with nature and greenery all around us. It may be flyover country, but it is one that has sheltered us from much that has become ugly and challenging in the modern urban environment. Our kids left their hometown for spells of their own to see the big city and touch the elephant. But, they have also gravitated back to a more accommodating and easy pace of living.

I hope that an interconnected world of knowledge will better allow all of us to live in circumstances of our own choosing, ones that help nurture ourselves and our families. For my family, achieving that vision in part has been helped by my being able to work from home. Now, after trying it out for a quarter of a century, I’m convinced I would not have it any other way.

headline:
Twenty-five Years of Working from Home
alternativeHeadline:
Technology has Advanced, but the Experience is Much the Same
author:
Mike Bergman
image:
http://www.mkbergman.com/wp-content/themes/ai3v2/images/2009Posts/090607_fax.jpg
description:
Mike looks back at 25 years of working from home, commenting on the advantages, lessons and surprises
articleBody:
see above
datePublished:
July 8, 2014