After nearly five years of concentrated development — including the past 20 months of quiet, background efforts — Structured Dynamics is proud to announce version 3.0 of its open-source Open Semantic Framework. OSF is a turnkey platform targeted to enterprises to bring interoperability to their information assets, achieved via a layered architecture of semantic technologies. OSF can integrate information from documents to Web pages and standard databases. Its broad functions range from information ingest and tagging to search and data management to publishing.

Until today, the version available for download was OSF version 1.x. While capable as an enterprise platform — indeed, it has been in use by a number of leading global enterprises since development first began — the capability of the platform was spotty and required consulting expertise to configure and set-up. SD was hired by Healthdirect Australia (HDA) nearly two years ago to enhance OSF’s capabilities and integrate it more closely with the Drupal open-source content management system, among other modern enterprise requirements. The OSF from those developments — the non-public version 2.0 specific to HDA — has now been generalized for broader public use with today’s public announcement of version 3.0. 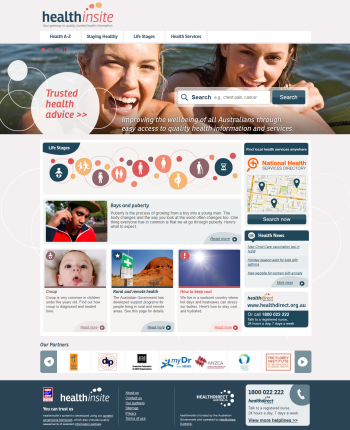 Not unlike many large organizations, HDA had specific enterprise requirements when it began its recent initiative. Included in these were stringent security, broad use of proven open-source applications, governance and workflow procedures, and strict content authoring and management guidelines. These requirements further needed to express themselves via a sequence of deployment and testing environments, all conducted by a multi-vendor support group following agile development practices.

These requirements placed a premium on performance, scalability and interoperability, all subject to repeatable release procedures and scripts. OSF’s initial development as a more-or-less standalone platform needed to accommodate an enterprise-wide management model involving many players, environments and applications. Prior decisions based on OSF alone now needed to consider and bridge modern enterprise development and deployment practices.

Tighter integration with Drupal was one of these requirements (see next section), but other OSF changes necessary to accommodate this environment included:

When Fred Giasson and I first designed and architected the Open Semantic Framework in 2009, we made the conscious decision to loosely couple OSF with the initial user interface and content management system, Drupal. We did so thinking that perhaps other CMS frameworks would be cloned onto OSF over time.

Time has not proven this assumption correct. Client experience and HDA’s interests suggested the wisdom of a tighter coupling to Drupal. This shift arose because of the great flexibility of Drupal with its tens of thousands of add-on modules and its ecosystem of capable developers and designers. Our early decision to keep Drupal at arm’s length was making it more difficult to manage an OSF instance. Existing Drupal developers were not able to employ their Drupal expertise to manage OSF portals.

We pivoted on this error by tightening the coupling to Drupal, which involved a number of discrete activities:

Some of the extended capabilities in OSF v 3.0 are noted above, including the expanded roster of Web services. However, the OSF Search Web service, which is by far the most used OSF endpoint, received massive improvements in this latest release.

First, OSF Search now uses a new query parser, which provides the capability to change the ranking of search results by boosting how specific query components get scored. Types, attributes, datasets or counts may be used to vary any given search result, including different occurrences on the same page. It is also now possible to add restrictions to the search queries, including restricting results to a specified set of attributes.

This flexibility is highly useful wherein certain structured pages contain blocks or sections with patterned search results. This structuring leads to the ability to create generic page templates, wherein search queries and results vary within the layout. An “events” block may score differently than, say, a “related topics” block, all of which in turn can respond to a given context (say, “cancer” versus “automobiles”) for a given page (and its template).

These repeated patterns lend themselves to the use of reusable “search profiles,” which are predefined queries that may include context variables. These profiles, in turn, can be named and placed on page layouts. Existing profiles may be recalled or invoked to become patterns for still further profiles. The flexibility of these search profiles is immense, and the parameters used in constructing them can be quite extensive.

Thus, OSF version 3.0 includes the new Query Builder module. Via an intuitive selection interface, users may construct search queries of any complexity, and then save and reuse them later as search profiles.

Lastly, registering, configuring and managing OSF instances and datasets into Drupal has never been easier. The new OSF Configure module centralizes all the features and options required for these purposes, which are then managed by a new suite of tools (see next).

Standard enterprise deployments that proceed from development to production require constant updates and versions, both in application code and content. Keeping track and managing these changes — let alone deploying them quickly and without error — requires separate management capabilities in their own right. The new OSF thus has a number of utilities and command-line tools to aid these requirements:

Tempered via Enterprise Development and Deployments

The methods and processes by which these advances have been made all occurred within the context of state-of-the-art enterprise IT management. Experience with supporting infrastructure tools (such as Jira, Confluence, Puppet, etc.) and agile development methods are part of the ongoing documentation of OSF (see next). This experience also bolsters Structured Dynamics’ ability to work with other third-party applications at the middleware layer or in support of enterprise deployments.

The Open Semantic Framework has evolved considerably since its conception now five years ago. In its early development, components and pieces were sometimes developed in isolation and then brought into the framework. This jagged development path led to a cacophony of names and terms to characterize portions of the OSF stack. This terminology confusion has made it more difficult than it needed to be to understand the vision of OSF, the layers of its architecture, or the interactions between its components and parts.

In making the substantial efforts to update documentation from OSF version 1.x to the current version 3.0, terminology was made consistent and code references were cleaned up to reflect the simpler OSF branding. This clean up has led to necessary updates across multiple Web sites maintained by Structured Dynamics with some relationship to OSF.

The Web site with the most changes required has been the OSF Wiki. In its prior incarnation, called TechWiki, there were nearly 400 technical articles on OSF. That site has now been completely rewritten and re-organized. Nearly two hundred new articles have been written in support of OSF v 3.0. Terminology related to the older cacophony (see correspondance table here) has (hopefully) been updated and corrected. Most architectural and technical diagrams have been updated. Additional documentation is being posted daily, catching up with the experience of the past twenty months.

Moving Beyond the Established Foundation

SD is pleased that enterprise sponsors want to continue beyond the Open Semantic Framework’s present solid foundations. While we are not at liberty to discuss specific client initiatives, a number of ongoing developments can be described broadly. First, in terms of the key engines that provide the core of OSF’s data management capabilities, initiatives are underway in the areas of visualization, business analytics and workflow orchestration and management. There are also efforts underway in more automated means for direct ingest of quality Web-based information, both based on linked data and from Web APIs. We are also pleased that efforts to further extend OSF’s tight integration with Drupal are also of interest, even while the integration efforts of the past months have not yet been fully exploited.

To learn more, make sure and check out the re-organized OSF wiki. See specifically the complete OSF overview, the list of all the OSF 3.0 features, and the list of all the new features to OSF 3.0. Also, for a complete soup-to-nuts view of what it takes to put up a new OSF installation, see the Users Guide. Lastly, for a broad overview of OSF, see its reference architecture and the overviews on its dedicated OSF Web site.

As a final note, Structured Dynamics would like to thank its corporate sponsors of the past five years for providing the development funds for OSF, and for agreeing with the open source purposes of the Open Semantic Framework.