Yesterday Fred Giasson announced the release of code associated with Structured Dynamics‘ open source semantics components (also called sComponents).  A semantic component is an ontology-driven component, or widget, based on Flex. Such a component takes record descriptions, ontologies and target attributes/types as inputs and then outputs some (possibly interactive) visualizations of the records.

Though not all layers are by any means complete, from an architectural standpoint the release of these semantic components provides the last and missing layer to complete our open semantic framework. Completing this layer now also enables Structured Dynamics to rationalize its open source Web sites and various groups and mailing lists associated with them.

We first announced the open semantic framework — or OSF — a couple of weeks back. Refer to that original post for more description of the general design [1]. However, we can show this framework with the semantic components layer as illustrated by what some have called the “semantic muffin”: 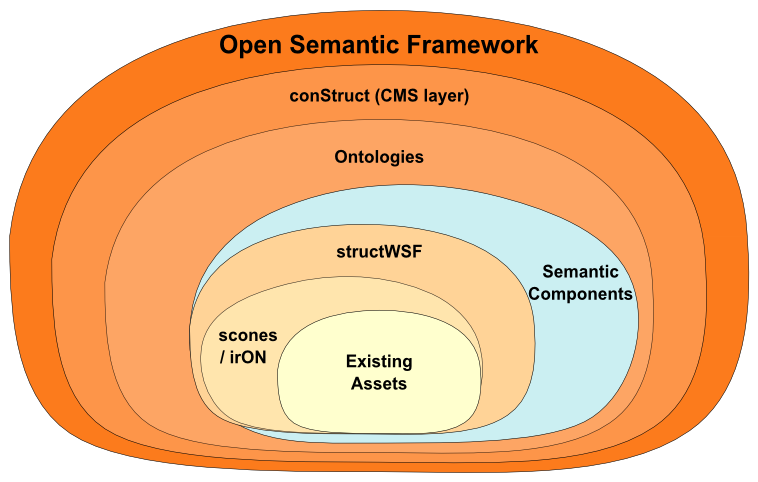 The OSF stack consists of these layers, moving from existing assets upward through increasing semantics and usability:

Not all of these layers are required in a given deployment and their adoption need not be sequential or absolutely depend on prior layers. Nonetheless, they do layer and interact with one another in the general manner shown.

Current semantic components, or widgets, include: filter; tabular templates (similar to infoboxes); maps; bar, pie or linear charts; relationship (concept) browser; story and text annotator and viewer; workbench for creating structured views; and dashboard for presenting pre-defined views and component arrangements. These are generic tools that respond to the structures and data fed to them, adaptable to any domain without modification.

Though Fred’s post goes into more detail — with subsequent posts to get into the technical nuances of the semantic components — the main idea of these components is shown by the diagram below.

These various semantic components get embedded in a layout canvas for the Web page. By interacting with the various components, new queries are generated (most often as SPARQL queries) to the various structWSF Web services endpoints. The result of these requests is to generate a structured results set, which includes various types and attributes.

An internal ontology that embodies the desired behavior and display options (SCO, the Semantic Component Ontology) is matched with these types and attributes to generate the formal instructions to the semantic components. These instructions are presented via the sControl component, that determines which widgets (individual components, with multiples possible depending on the inputs) need to be invoked and displayed on the layout canvas. Here is a picture of the general workflow: 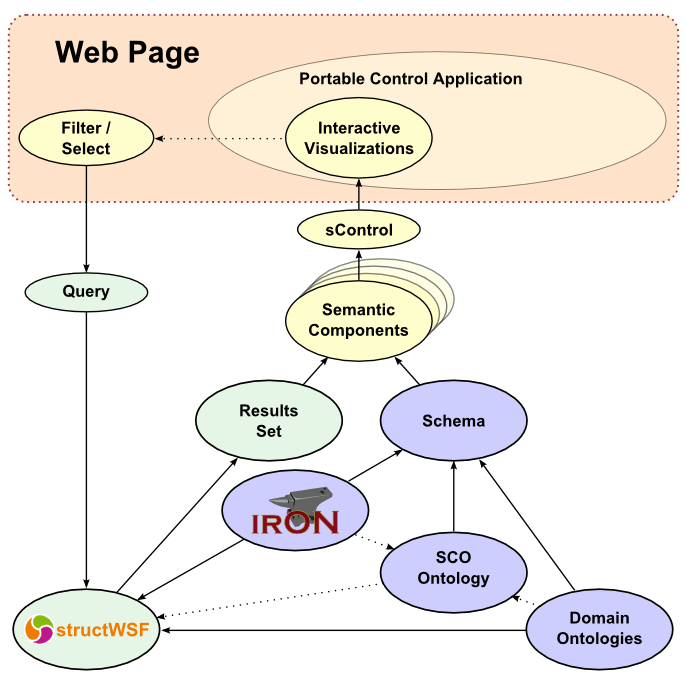 New interactions with the resulting displays and components cause the iteration path to be generated anew, again starting a new cycle of queries and results sets. As these pathways and associated display components get created, they can be named and made persistent for later re-use or within dashboard invocations.

As the release of the semantic components drew near, it was apparent that releases of previous layers had led to some fragmentation of Web sites and mailing lists. The umbrella nature of the open semantic framework enabled us to consolidate and rationalize these resources.

Our first change was to consolidate all OSF-related material under the existing OpenStructs.org Web site. It already contained the links and background material to structWSF and irON. To that, we added the conStruct and OSF material as well. This consolidation also allowed us to retire the previous conStruct Web site as well, which now re-directs to OpenStructs.

We also had fragmentation in user groups and mailing lists. Besides shared materials, these had many shared members. The Google groups for irON, structWSF and conStruct were thus archived and re-directed to the new Open Semantic Framework Google group and mailing list. Personal notices of the change and invites have been issued to all members of the earlier groups. For those interested in development work and interchange with other developers on any of these OSF layers, please now direct your membership and attention to the OSF group.

There has also been a revigoration of the developers’ community Web site at http://community.openstructs.org/. It remains the location for all central developer resources, including bug and issue tracking and links to SVNs.

We hope you find these consolidations helpful. And, of course, we welcome new participants and contributors!

[1] An alternative view of this layer diagram is shown by the general Structured Dynamics product stack and architecture.

headline:
Consolidating a Coherent Message with OSF
alternativeHeadline:
Release of Semantic Components Adds Final Layer, Leads to Streamlined Sites
author:
Mike Bergman
image:
http://www.mkbergman.com/wp-content/themes/ai3v2/images/2010Posts/100706_osf_consolidation.png
description:
Though not all layers are by any means complete, from an architectural standpoint the release of these semantic components provides the last and missing layer to complete our open semantic framework. Completing this layer now also enables Structured Dynamics to rationalize its open source Web sites and various groups and mailing lists associated with them
articleBody:
see above
datePublished:
July 6, 2010