It is perhaps not surprising that the first substantive post in this occasional series on ontology best practices for data-driven applications begins with the importance of keeping an ABox and TBox split. Structured Dynamics has been beating the tom–tom for quite a while on this topic. We reiterate and expand on this position in this post.

The Relation to Description Logics

Description logics (DL) are one of the key underpinnings to the semantic Web. DL are a logic semantics for knowledge representation (KR) systems based on first-order predicate logic (FOL). They are a kind of logical metalanguage that can help describe and determine (with various logic tests) the consistency, decidability and inferencing power of a given KR language. The semantic Web ontology languages, OWL Lite and OWL DL (which stands for description logics), are based on DL and were themselves outgrowths of earlier DL languages.

Description logics and their semantics traditionally split concepts and their relationships from the different treatment of instances and their attributes and roles, expressed as fact assertions. The concept split is known as the TBox (for terminological knowledge, the basis for T in TBox) and represents the schema or taxonomy of the domain at hand. The TBox is the structural and intensional component of conceptual relationships. It is this construct for which Structure Dynamics generally reserves the term “ontology”.

The second split of instances is known as the ABox (for assertions, the basis for A in ABox) and describes the attributes of instances (or individuals), the roles between instances, and other assertions about instances regarding their class membership with the TBox concepts. Both the TBox and ABox are consistent with set-theoretic principles.

TBox and ABox logic operations differ and their purposes differ. TBox operations are based more on inferencing and tracing or verifying class memberships in the hierarchy (that is, the structural placement or relation of objects in the structure). ABox operations are more rule-based and govern fact checking, instance checking, consistency checking, and the like. ABox reasoning is generally more complex and at a larger scale than that for the TBox.

Early semantic Web systems tended to be very diligent about maintaining these ‘box’ distinctions of purpose, logic and treatment. One might argue, as Structured Dynamics does, that the usefulness and basis for these splits has been lost somewhat more recently.

Particularly as we now see linked data become more prevalent, these same questions of scale and actual interoperability are posing real pragmatic challenges. To help aid this thinking, we have re-assembled, re-articulated and in some cases added to earlier discussions of the purposes of the TBox and ABox:

As the table shows, the TBox is where the reasoning work occurs, the ABox is where assertions and data integrity occurs, and knowledge base work in the middle (among other aspects) requires both. We can reflect these work splits via the following diagram: 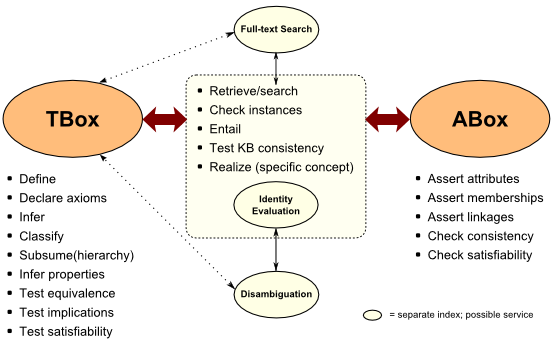 This figure maps the work activities noted in the table, with particular emphasis on the possible and specialized work activities at the interstices between the TBox and ABox.

The Split Should Feel Natural

Whether a single database or the federation across many, we have data records (structs of instances) and a logical schema (ontology of concepts and relationships) by which we try to relate this information. This is a natural and meaningful split: structure and relationships v. the instances that populate that structure.

Stated this way, particularly for anyone with a relational database background, the split between schema and data is clear and obvious. While the relational data community has not always maintained this split, and the RDF, semantic Web and linked data communities have not often done so as well, this split makes eminent sense as a way to maintain a desirable separation of concerns.

The importance of description logics — besides its role as a logical underpinning to the semantic Web enterprise — is its ability to provide a perspective and framework for making these natural splits. Moreover, with some updated thinking, we can also establish a natural framework for guiding architecture and design. It is quite OK to also look to the interaction and triangulation of the ABox and TBox, as well as to specialized work that is not constrained to either.

For example, identity evaluation and disambiguation really come down to the questions of whether we are talking about the same or different things across multiple data sources. By analyzing these questions as separate components, we also gain the advantage of enabling different methodologies or algorithms to be determined or swapped out as better methods become available. A low-fidelity service, for example, could be applied for quick or free uses, with more rigorous methods reserved for paid or batch mode analysis. Similarly, maintaining full-text search as a separate component means the work can be done by optimized search engines with built-in faceting (such as the excellent open-source Solr application).

These distinctions feel obvious and natural. They arise from a sound grounding in the split of the ABox and the TBox.

So, to conclude this part in this occasional series, here are some of the key reasons to maintain a relative split between instances (the ABox) and the conceptual relationships that describe a world view for interpreting them (the TBox):

Here is a final best practice suggestion when these ABox and TBox splits are maintained: Make sure as curators that new attributes added at the instance level are also added with their conceptual relationships at the TBox level. In this way, the knowledge base can be kept integral while we simultaneously foster a framework that eases the broadest scope of contributions.

This post is part of an occasional AI3 series on ontology best practices.

headline:
The Fundamental Importance of Keeping an ABox and TBox Split
alternativeHeadline:
Ontology Best Practices for Data-driven Applications: Part 2
author:
Mike Bergman
image:
http://www.mkbergman.com/wp-content/themes/ai3v2/images/2009Posts/090517_impossible1sm.gif
description:
Description logics (DL) are one of the key underpinnings to the semantic Web. DL are a logic semantics for knowledge representation (KR) systems based on first-order predicate logic (FOL). They are a kind of logical metalanguage that can help describe and determine (with various logic tests) the consistency, decidability and inferencing power of a given KR language.
articleBody:
see above
datePublished:
May 17, 2009