A New Report from Norway Compares Topic Maps, RDF/OWL, UML and Others

No, the title does not refer to NO as in no, nyet, nein, non or ne, but NO as in Norway.

NorStella, the Norwegian Foundation for E-business and Trade Procedures, has published a 51-pp PDF report edited by Øyvind Aassve, called The SIM Report: A Comparative Study of Semantic Technologies. Though Norway is perhaps the most aggressive country in the use of topic maps, and Steve Pepper and Lars Marius Garshol of Onotopia (among the ten contributors) are also noted advocates for topic maps, the report’s treatment of its five comparative semantic technologies is balanced and informative.

This group of ten contributors formed over beers about two years ago under the banner of what they called, “Semantic Interoperability Models” (SIM). As they note in the report,

. . . we found that we as representatives for different semantic technologies were talking different languages. We were explaining our technologies with different terms to mean the same thing and the same term to mean different things, and our models for addressing the issue of semantic interoperability were so different it was hard to get our message across to people who already identified deeply with their own way of thinking. We were supposed to be experts on semantic technologies, but we experienced a complete breakdown of semantic interoperability among ourselves.

How true. It is bold of this group to recognize this gap and to commit to help bridge understanding.

As I have noted many times regarding basic semantic Web approaches, even within the fold, so to speak, there are large challenges of semantics and usage. Yet, when such perspectives are extended across multiple technologies and mindsets, the challenges become still more daunting.

The interest in this group was to find common ground to explain their different but complementary approaches to the lay public and to the enterprises to which many of them consult. The attempt correctly recognizes that there will always be competing approaches and mindsets and technologies geared to roughly the same aims, though perhaps suited for different use cases or strengths.

The group set as its objective to increase understanding of five candidate semantic technologies in order to better promote semantic interoperability. They defined semantic operability as the “ability to share information (or knowledge) based on its meaning — i.e., what it is about.” The report notes that “semantic interoperability thus focuses on the benefits that can be achieved by mediating structures, meanings and contexts within relatively confined and well-understood domains.”

As such, this report is a very effective introduction and a good explication of the issues and trade-offs in semantic representation.

The first part of the report is dedicated to a balanced discussion of the five semantic technologies chosen for comparison:

Note that XML is not included in this list because it is geared to syntax representation and serialization, not the underlying semantics.

Though based on different perspectives and use cases, this group found some common characteristics amongst the approaches:

These are the commonalities explicitly listed. But, we also see in the group’s diagram an interesting commitment across these approaches to what is now recognized as the subject–predicate–object “triple”: 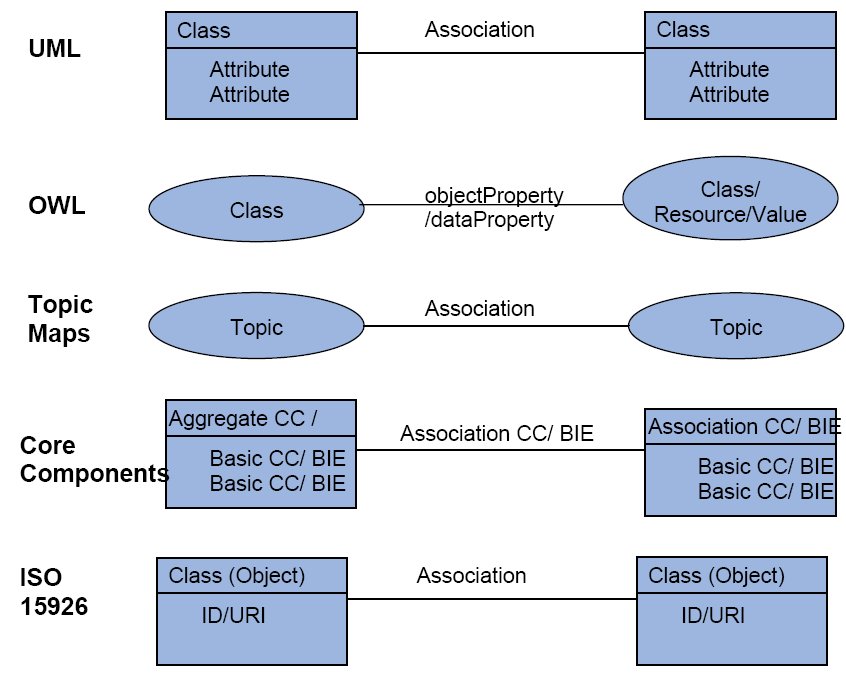 There are real fundamental concepts and principals underlying this embracing of first-order logic and the triple diagram of object-action-referent expressed in so many different ways by philosophers and semanticists.

Sure, there are real differences (most of which are likely well beyond my ken). But, when boiled down, we can see that whether we call things “things” or objects or subjects or referents or entities or the myriad of ways that we try to discuss the same concepts or topics or subjects, everyone is still basically trying to capture the same things and meanings.

So, in our triples, we can call the relations between an object (“subject”) and its referent (“object”) by many different things: verbs, predicates, properties, associations, and, indeed, even relations. In the end, we are all simply trying to express the “facts” of our observed world, our “assertions”.

While the authors of the NO study are careful not to use these terms, they do nibble around the edges that both by design, scope or expressiveness, each of the five candidate approaches may be better suited for different uses. It is useful to understand domain and scope when choosing one of these options.

Is the purpose to model software systems or use cases? Transactions (such as order processing systems)? Knowledge representation? Visualization or analytic modeling? Use and application of controlled vocabularies? Control structures or process systems?

Of course, in the end, the market will decide about all of these approaches. But, because of unique strengths in representation or historical or local uptake, each of the five is likely to survive to some extent.

In terms of scope and coverage, I found the report’s Section 8 FAQ to be quite useful. I would have preferred more citations, especially of a reference or seminal nature, since the five approaches each had its own advocates. The earlier detailed work on RDF-Topic Maps relations and its nature [1] deserved more than a simple note in passing. And, the sections on tools were very weak.

But these are small quibbles. As the opening quote notes eloquently, our broader challenge is that we are saddled with semantic, world view, and domain differences.

I really respect and like efforts like this. There is no single truth. In the reality of the Web and our global commons, there are many approaches and viewpoints.

What we see in these more comprehensive approaches are a reflection of other Web standards such as microformats or tagging or RDFa or, frankly, any of the means by which any of us attempt to provide structure and enhanced meaning (“metadata”) to the content we encounter and process. What I find remarkable about the methods outlined in the NO study is how many similarities there are to approach and viewpoint. Surely, we can easily overcome the differences and forgive the differences. We will also find common ground for translation and interoperability.

As the RDF-Topic Maps studies mentioned before show, in the end, I think it really does not matter what flavor of semantic technology you prefer. Speak your language and in your own way. We are now seeing the emergence of sufficiently similar frameworks such that we’ll be able to collectively figure out how to bridge differences and effectively communicate.

headline:
NO Semantic Technologies
alternativeHeadline:
author:
Mike Bergman
image:
description:
A New Report from Norway Compares Topic Maps, RDF/OWL, UML and Others No, the title does not refer to NO as in no, nyet, nein, non or ne, but NO as in Norway. NorStella, the Norwegian Foundation for E-business and Trade Procedures, has published a 51-pp PDF report edited by Øyvind Aassve, called The SIM […]
articleBody:
see above
datePublished:
June 7, 2008