LinkedData Planet and LDOW Set the Pace for 2008

Linked Data follows recommended practices for identifying, exposing and connecting data on the semantic Web. A robust Linking Open Data (LOD) community has rapidly developed around the practice since its approval as a formal project of the W3C’s Semantic Web Education and Outreach (SWEO) Interest Group in March 2007. Though counts rapidly become dated, today, in less than a year, the size of the Linked Data on the Web exceeds several billion RDF triples.

This foundation of interlinkable data comes from the highest value reference sources available, and includes most notable place, people, event, book, music, cultural, language and government entities. The following official figure of the LOD community, maintained by one of its founders, Richard Cyganiak, is updated frequently (click on the figure below to get the most recent interactive version), and shows well the breadth of this data value: 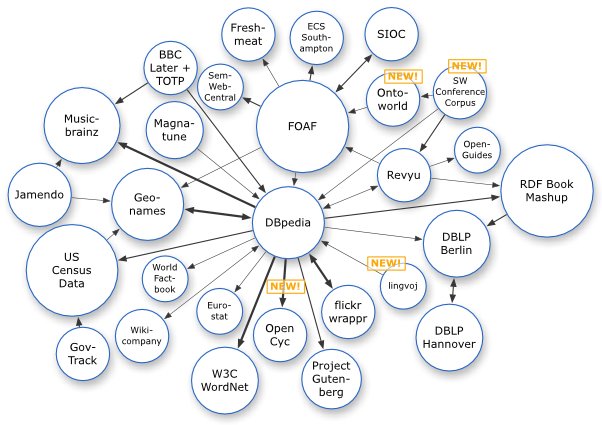 It would be putting it mildly to say that the LOD project has been a roaring success. New initiatives like the Billion Triple Challenge will continue to rapidly push forward the size and frontiers of Linked Data. We also have two signal events coming up in 2008 that demonstrate just how much Linked Data is coming of age.

The newly announced LinkedData Planet Conference and Expo being held in New York City on June 17th and 18th is notable for a number of reasons (besides Tim Berners-Lee being the special keynote speaker).

First, the conference represents the first direct exposure of Linked Data to the business and enterprise community. For years, the semantic Web community has largely been an academic one with its own set of meetings and venues. That began to change with the recent series on the Semantic Technology Conferences, held as usual in San Jose in May (this year’s is May 18-22). That meeting in 2007 drew more than 800 attendees and marked the first time that significant presence from the academic and research communities occurred.

Though valuable and chock-a-block with enterprise case studies, the Semantic Technology conference also is challenged by the amorphous understanding of what is the “semantic Web”. Reaching common understandings and getting cross-fertilization between the business and research communities can be a challenge.

Second, the LinkedData Planet Conference is occurring in NYC with an anticipated strong participation from East Coast financial interests. Like the Semantic Technology Conferences, it is important that the nascent technologies and applications supporting Linked Data receive the venture and funding attention they deserve.

Third, Jupitermedia is the event manager for the conference. Jupitermedia has a long history in producing quality industry events such as Internet World, Search Engine Strategies and ISPcon. Its meetings typically blend excellent content with strong community outreach and participation.

But, last, and to my mind most important, the very topic of Linked Data is very focused and pragmatic. There are real methods, real techniques and real applications available now to take advantage of Linked Data now. The business community need not wait on full semantics and total data exposure and automation in order to receive real value today.

Last July I wrote a piece entitled, More Structure, More Terminology and (hopefully) More Clarity. It, and related posts on the structured Web, had as its thesis that the Web was naturally evolving from a document-centric basis to a “Web of Data”. We already have much structured data available and the means through RDFizers and other techniques to convert that structure to Linked Data. Linked Data thus represented a very doable and pragmatic way station on the road to the semantic Web. It is a journey we can take today; indeed, many already are as the growth figures noted attest.

Here is a repeat of the diagram I used last July to make that argument (now highlighting the Linked Data phase in red):

Hopefully, the LinkedData Planet Conference will act as a similar catalyst within the business community as the LOD project has been in the research one. And, hopefully, academia, research, venture and business interests can all come together over these two days to exploit the Linked Data value so readily at hand.

Another signal event coming up is the Linked Data on the Web (LDOW) workshop at the 17th International World Wide Web Conference (WWW2008) in Bejing. LDOW is a full-day session involving a mix of papers and demos on April 22. A significant roster of very interesting submissions has been made (disclosure: I am both on the program committee and a submitting author).

Linked Data was arguably the highlight at WWW2007 in Banff, and LDOW will certainly show just how far this approach has come in one short year. LDOW will likely provide a preview of many of the applications and approaches that will receive fuller attention at the LinkedData Planet Conference two months later.

It is exciting to see Linked Data emerging as today’s pragmatic focus for bringing further structure, connections and semantics to the Web. For those of you new to the concept, I encourage you to become active and involved in 2008. And, for those of you already active, I look forward personally to working with you further in the coming year.