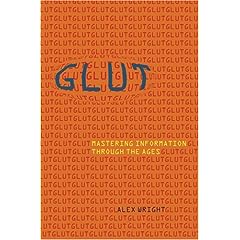 When I first saw the advanced blurb for Glut: Mastering Information through the Ages by Alex Wright I thought, “Wow, here is the book I have been looking for or wanting to write myself.” As the book jacket explains:

Spanning disciplines from evolutionary theory and cultural anthropology to the history of books, libraries and computer science, Wright weaves an intriguing narrative that connects such seemingly far-flung topics as insect colonies, Stone Age jewelry, medieval monasteries, Renaissance encyclopedias, early computer networks, and the World Wide Web. Finally, he pulls these threads together to reach a surprising conclusion, suggesting that the future of the information age may lie deep in our cultural past.

Wham, bang! The PR snaps with promise and scope!

These are themes that have been my passion for decades, and I ordered the book as soon as it was announced. It was therefore with great anticipation that I cracked open the cover as soon as I received it. (BTW, the actual date of posting for this review is much later only because I left this review in draft for some months; itself an indication of how, unfortunately, I lost interest in it. 🙁 ).

Otlet is a Gem

The best aspect of Glut is the attention it brings to Paul Otlet, quite likely one of the most unique and overlooked innovators in information science in the 20th century. Frankly, I had only an inkling of who Otlet was prior to this book, and Wright provides a real service by bringing more attention to this forgotten hero.

(I have since gone on to try to learn more about Otlet and his pioneering work in faceted classification — as carried on more notably by S. R. Ranganathan with the Colon classification system — and his ideas behind the creation of the Mundaneum in Brussels in 1910. The Mundaneum and Otlet’s ideas were arguably a forerunner to some aspects of the Internet, Wikipedia and the semantic Web. Unfortunately, the Mundaneum and its 14 million ‘permanent encyclopedia’ items were taken over by German troops in World War II. The facility was ravaged and sank into obscurity, as did Otlet’s reputation, who died in 1944 before the war ended. It was not until Boyd Rayward translated many of Otlet’s seminal works to English in the late 1980s that he was rediscovered.)

Alex Wright’s own Google Tech Talk from Oct. 23, 2007, talks much about Otlet, and is a good summary of some of the other topics in Glut.

The real disappointment in Glut is the lack of depth and scholarship. The basic technique seemed to be find a prominent book on a given topic, summarize it in a popularized tone, sprinkle in a couple of extra references from the source book relied on for that chapter to show a patina of scholarship, and move on to the next chapter. Then, add a few silly appendices to pad the book length.

So, we see, for example, key dependence on a relative few sources for the arguments and points made. Rather than enumerate them here, one approach if interested is to simply peruse the expanded bibliography on Wright’s Glut Web site. That listing is actually quite a good basis for beginning your own collection.

I feel like Glut is related to similar efforts where not enough homework was done. For example, see Walter Underwood, who in his review of the Everything is Miscellaneous (not!) book, chastises author David Weinberger on similar grounds. (A conclusion I had also reached after viewing this Weinberger video cast.)

In summary, I give Wright an A for scope and a C or D in execution and depth. I realize that is a pretty harsh review; but it is one occasioned by my substantially unmet high hopes and expectations.

The means by which information and document growth has come to be organized, classified and managed have been major factors in humanity’s progress and skyrocketing wealth. Glut‘s skimpy hors d’œuvre merely whet the appetite: the full historical repast has yet to be served.

headline:
Glut: Information Underload for Information Overload
alternativeHeadline:
author:
Mike Bergman
image:
description:
Wright’s Book Has Strong Scope, Disappointing Delivery When I first saw the advanced blurb for Glut: Mastering Information through the Ages by Alex Wright I thought, “Wow, here is the book I have been looking for or wanting to write myself.” As the book jacket explains: Spanning disciplines from evolutionary theory and cultural anthropology to […]
articleBody:
see above
datePublished:
March 2, 2008