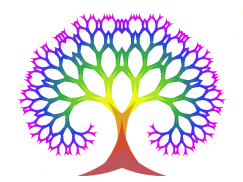 Candidate Structures (?) are Manifest and All Over the Map

Some of my previous postings on the structured Web have covered such items as the nature of data structure (including structured, semi-structured and unstructured data), the 40 or so existing data formalisms on the Web (ranging from standard Web pages through feeds and tags to formal ontologies), and various serialization and extraction formats.

That there is a huge diversity of data structure and forms on the Web is clear. Yet, even in the face of such complexity, there is the natural human penchant for organizing things. What is surprising is the almost total lack of an overarching model or schema for classifying and organizing these various forms of Web data.

There is today no accepted data model — nor accepted vocabulary — for Web data models.

A model to classify data structure on the Web would be useful for helping to find meaningful generalities for accessing and using that data. Such a model would also be useful to help organize and streamline the pathways for processing or converting the data from one source form into another. This latter purpose is essential to data federation or combining data from multiple sources — namely, broadening the current innovation of linked data for RDF to all Web data forms.

In the case of the UMBEL lightweight subject reference structure, such a model or organizational schema would also help guide the characterization of source datasets for meaningful processing and access. Thus, formulating such a model or schema is a central task for completing the core UMBEL ontology.

This Part I posting presents a survey of current practice and terminology, with a specific call to begin a practice of Web informatics. This material leads to a forthcoming Part II, wherein this information is then used to present an updated technical data vocabulary and partial ontology for the technical data model at the center of the UMBEL core.

A Call for a Web Informatics

Considerable work has been done on data warehousing and ETL (extract, transform, load) relations in enterprise information integration (EII) for structured data, as well as in the general area of personal information management (PIM). In these cases, traditional MIME types, enterprise service buses, structured database constructs, and application-specific file formats are the drivers within the various schema.

The first sub-discipline of Web science — Web informatics — could stand above the fray of the advocacies of various data and protocol communities.

No such discipline has yet appeared for the broader Internet. But we can learn from these other efforts, as well as match them with conceptually grounded structures from computer science, information theory and informatics.

The concept of informatics appears particularly apropos to the questions of Web data, given the heterogeneity of Web data and its lack of conceptual consensus. The biology and genetics communities faced similar issues a decade or so ago when the discipline of bioinformatics began to take hold. According to Michael Fourman [1]:

The University of Edinburgh called for a Web informatics initiative more than five years ago, an effort that does not appear to have gained a significant toehold. Perhaps the timing was too soon. Just as we saw many founding individuals of the Web and other luminaries call for the establishment of a discipline in Web science about one year ago [2], I think the time is now ripe for us to nominate Web science’s first sub-discipline: Web informatics.

That was not a conclusion I began with as I researched this two-part series. But, as I came to see the lack of conceptual, terminology or theoretical consistency around the questions of data, information and their organizational schema on the Web, I became convinced that some bridging construct could be helpful.

The Web is a reflection of global society with its broad spectrums of pettinesses, high ideals, brilliance, stupidity and good and evil. With respect to data and its representations and schema, there seems to be very strong tribalisms. Passion and advocacies are not likely to go away. Even camps which have stated “higher” purposes for data integration and use — such as the topic maps, microformats and the semantic Web communities (a listing by no means meant to be complete) — naturally have their own prejudices and passions.

Frankly, I personally believe all of this to be well and good and communities should be free to chose their own paths and formalisms. The hope for a discipline of Web informatics, however, is that conceptual frameworks and understandings can be developed such that these data communities can interoperate with a modicum of efficiency. Perhaps one or more innovative university departments will take up the call to help establish the umbrella frameworks for interoperable Web data.

A Hodgepodge of Structures and Formalisms

I will not repeat my earlier posting, but one way to see the scope of these Web data dilemmas is to simply list the 40 or so data structures and formalisms currently extant on the Web:

For more information on any of these, the reader is encouraged to look at my earlier post, especially its references.

This variety also does not yet begin to address the various transmission formats (or serializations) by which such data can be transmitted across the Web (e.g., JSON, XML. etc., etc.) nor varieties of encodings (ASCII, Unicode variants, many historical language ones such as Big 5 for Chinese, etc., etc.).

Of course, there are even multiple variants for the listed formalisms. For example, there are multiple microformats, tens to hundreds of schemas and domain vocabularies, and many other varieties within any single category.

Actually, whether there are 20 (as shown) or 40 or 400 data form variants on the Web is a matter of definition and terminology, the lack of consensus to which means there is no “accurate” understanding for any of this stuff.

The careful reader will have seen my almost interchangeable use of concepts such as schema, formalism, structure, model or format in the above paragraphs. So, well, what is it?

Good question. (That is what everyone answers when they don’t know what to answer — which is true for me.)

The data formalisms listed above, and many others not listed, produce a dizzying array of terms and concepts.

Listed below are more than 300 data-related terms gleaned from current Web practice regarding data type descriptions, data format options, roles of using that data, and many confusing and conflicting “dimensions” by which to describe data on the Web. (Granted, not all are classifactory or structural in nature as the basis for “formalisms” or “models”, but that is also not self-evident solely on the basis of inspection or use of term or concept.)

Please note that most of these terms can be looked up directly and individually on Wikipedia:

A Brief Survey of Reference Schema and Vocabularies

Acknowledging that no one has yet (foolishly or otherwise) attempted to classify this mess, we can however list some of the intellectual bases from which such a classification or “model” might emerge. Accessing and managing the diversity of Web data is not new; many organizations and entities have needed to tackle a portion of this challenge according to their specific circumstances.

Of course, the UMBEL initiative is a major lens through which these options are viewed. A basic Web informatics would likely begin with these intellectual underpinnings (many surely missed; please let me know!), since each of the survey sources or projects listed alphabetically below represents many hours of effort from many very capable individuals. Also please note that close inspection of most of the entries below will uncover their own data architectures, schema and vocabularies: 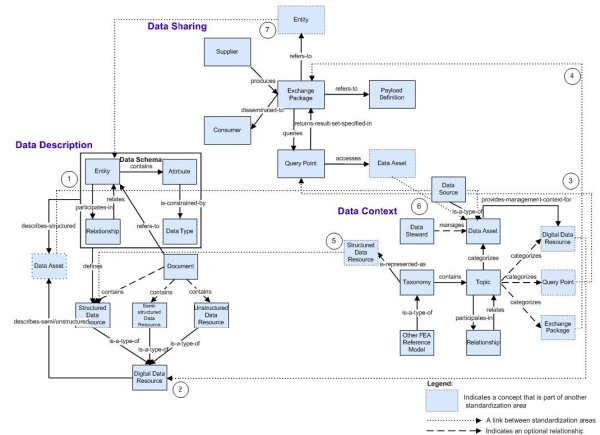 Formal ontologies of this are also presently being developed (see http://www.osera.gov/owl/2004/11/fea/srm.owl, for example).

All of the approaches above bring terminology, organization, and structure to the question of Web data. A Web data model that hopes to embrace this diversity of perpsepctives and data use should be familiar at least a cursory level with the objectives and mindsets of each.

Okay, so how does one begin to organize and find common ground in these diverse perspectives? (Which may not be possible across the board!).

The first challenge, I believe, is to find a common vocabulary. While there is inherent structure and organization to concepts, the first step is to ensure all parties are in fact or intent referring to the same thing when they say or write the same term. Getting this agreement is not so easy, and many standards bodies continue to discuss and argue about specific terms even after official “standards” have been adopted.

Indeed, much of the progress of the semantic Web or microformats or whatever community depends on agreeing to what is meant by specific terms or phrases.

Given the broad terminology noted before, the listing below attempts to provide a consistent basis for defining appropriate baseline concepts to a Web data model. Rather than writing my own personal definitions, most of the following are definitions from W3C specifications or recommendations. The two principal sources are the Web Architecture[7] glossary and the Web Services[8] glossary; the remaining listings are drawn from various other W3C glossaries and definitions as presented in the online W3C Glossary[9] service. In addition, some of the definitions have supplementary entries from either wiktionary[10] (using the closest computer-related term where there are multiples) or Wikipedia[11]. Finally, in the case of a few entries, specific other references are invoked.

All source references are listed at the conclusion of this post.

In addition to this compilation, another good, comprehensive source for glossary terms is the FEA Data Reference Model (see description above).

” . . . modeling data at web scale requires that we model everything.”

In this first Part I of our Web data model investigations, the limited objective has been to identify and assemble schema, formalisms, structure and syntax across the breadth of the Web.

Such assemblages are often dry and somewhat uninteresting. This one is likely no exception.

On the other hand, the dimensions of Web data interoperability are anything but boring. This is the ground on which the next few generations of Web user (and entrepreneurs) will compete or thrive.

Though in Part II we strive to develop a unified conceptual model, we actually err to embrace ease-of-execution. Such statements, of course, are easier to state than to make happen.

This posting is part of an occasional series on the Structured Web.

[2] Tim Berners-Lee, Wendy Hall, James Hendler, Nigel Shadbolt and Daniel J. Weitzner, “Creating a Science of the Web,” Science 313 (11), August 2006. I personally took up the Web scientist mantle and still proudly wear it as one of its acolytes.

headline:
A Data Model of Web Data Models: Part I
alternativeHeadline:
author:
Mike Bergman
image:
description:
Candidate Structures (?) are Manifest and All Over the Map Some of my previous postings on the structured Web have covered such items as the nature of data structure (including structured, semi-structured and unstructured data), the 40 or so existing data formalisms on the Web (ranging from standard Web pages through feeds and tags to […]
articleBody:
see above
datePublished:
October 10, 2007

One thought on “A Data Model of Web Data Models: Part I”