Completing the Schema for the Relations Addition

In the previous part of this series I discussed the relations model that we are adding to the KBpedia knowledge structure for its upcoming version 1.50. This article continues that discussion by fleshing out the concept hierarchy for this relations addition. These changes are taking place within the upper structure of KBpedia, what we call the KBpedia Knowledge Ontology, or KKO. The addition of this relations model affects both the class hierarchy of KKO and its properties structure. Both aspects are discussed below.

The previous parts of this series introducing the new KBpedia v 150 provide the rationale for adding a relations or predications structure to KBpedia, as well as the rationale for grounding this structure in the universal categories and logic of relations developed by Charles Sanders Peirce. Let me expand on those arguments a bit further here.

Recall from the earlier parts in this discussion that we want to adopt a schema for relations because we are interested in assertions and propositions in our knowledge structures. As Peirce notes [1],”The unity to which the understanding reduces impressions is the unity of a proposition. This unity consists in the connection of the predicate with the subject; and, therefore, that which is implied in the copula, or the conception of being, is that which completes the work of conceptions of reducing the manifold to unity.” (CP 1.548). The previous part discussed the rationale for three main classes of relationship types and how they related to Peirce’s views on logic and the theory of signs (semiosis). It is now time to expand on those distinctions.

The Second Level of the Relations Hierarchy

These three main categories correspond to Peirce’s universal categories of Firstness, Secondness and Thirdness [2]. (Where appropriate, I also sometimes footnote some Peirce quotes relevant to the category at hand.) Using the same trichotomous approach to categorization [2], we can now expand these three main relational categories into a second level of nine categories: 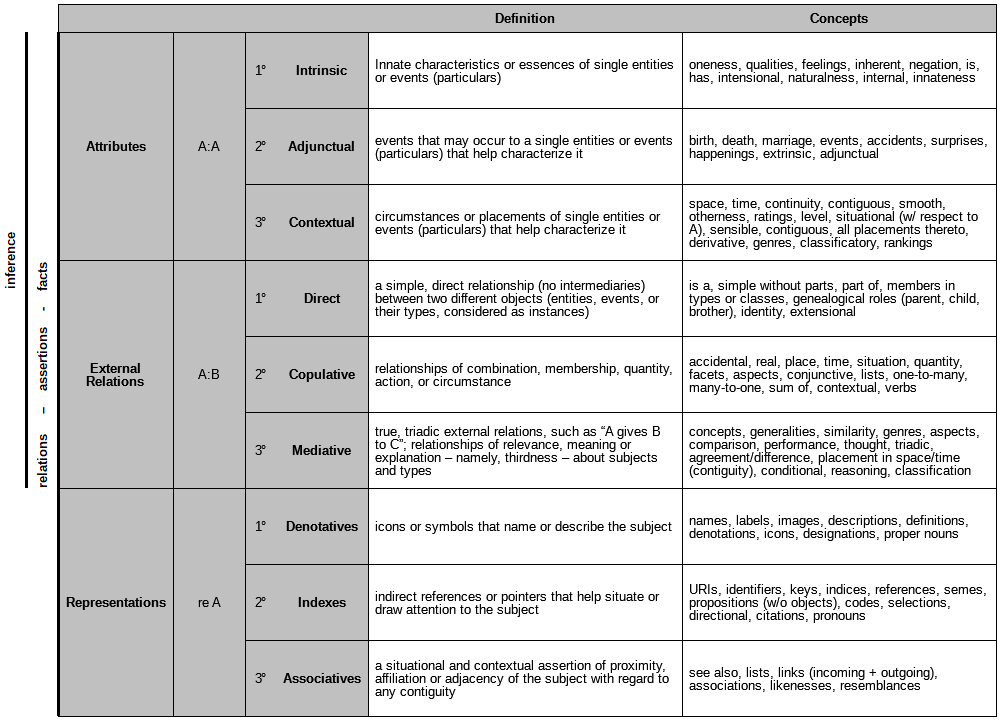 For Attributes (A:A), the split is into these three categories:

For External Relations (A:B), the split is into these three categories:

And, for Representations (re:A), the split is into these three categories:

The Third Level of the Relations Hierarchy

For the next level, we can continue with our process of categorization based on the universal categories applied to the nine categories listed above. Here is the schema that results from this approach: 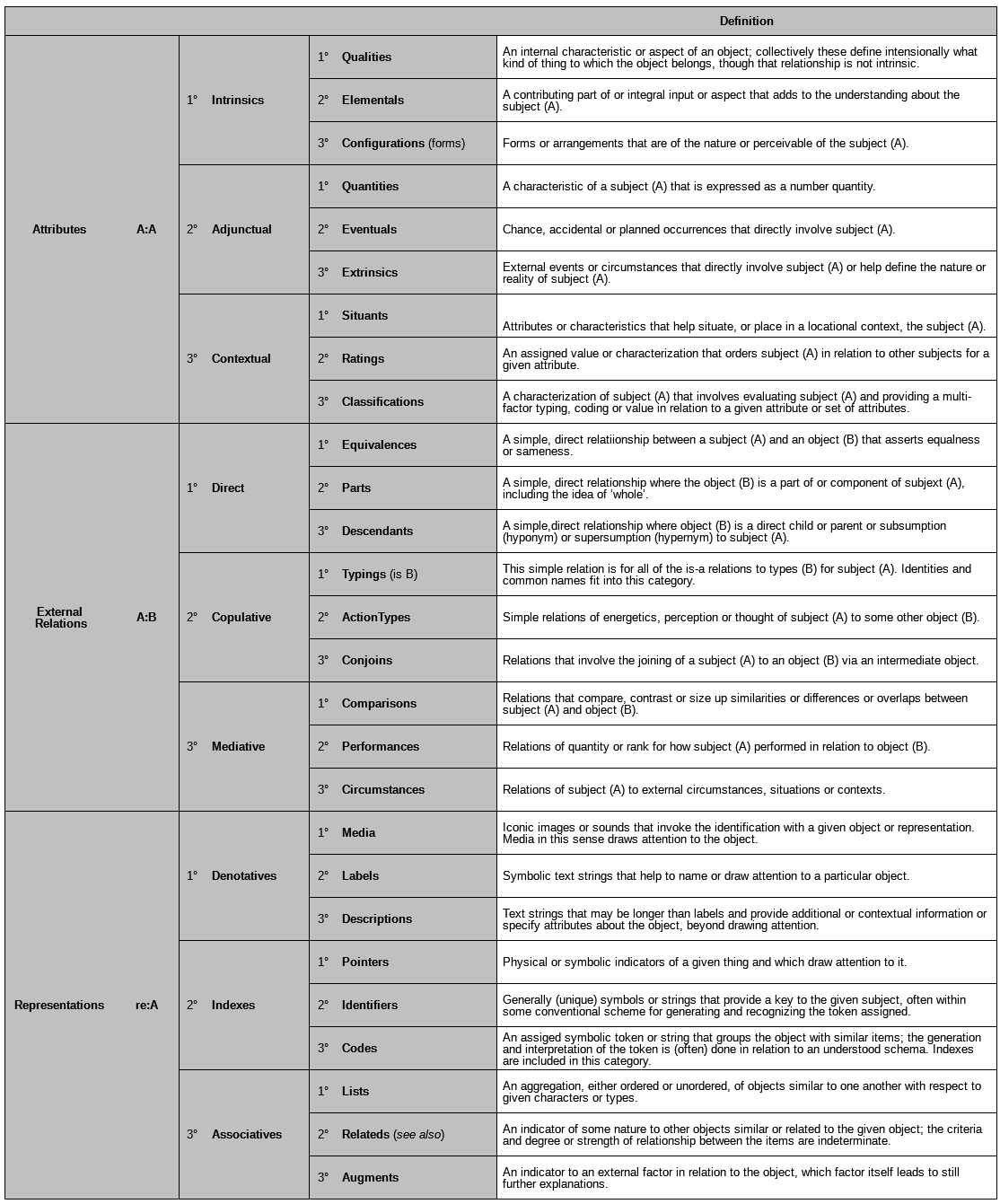 For the mid-level category of Intrinsics, the first of three categories under Attributes, here are the three subsidiary categorizations (representing the Firstness, Secondness and Thirdness, respectively):

For the mid-level category of Adjunctual, here are the three subsidiary categorizations:

For the mid-level category of Contextual, here are the three subsidiary categorizations:

For the mid-level category of Direct, the first of three categories under External Relations, here are the three subsidiary categorizations:

For the mid-level category of Copulative, here are the three subsidiary categorizations:

For the mid-level category of Mediative, here are the three subsidiary categorizations:

For the mid-level category of Denotatives, the first of three categories under Representations, here are the three subsidiary categorizations:

For the mid-level category of Indexes, here are the three subsidiary categorizations:

And, lastly, for the mid-level category of Associatives, here are the three subsidiary categorizations:

These categories, then, complete the three levels underneath the KBpedia Knowledge Ontology’s Predications branch (itself a Secondness under the basic Thirdness of Generals). We have established these as concepts within KKO such that we may reason over the ideas of these categories, and do other conceptual work with them. This conceptualization is helpful in order to consider the ideas of predicates and the relationships between them. However, for mapping properties from external sources, we need a parallel structure in terms of KKO properties.

An Analogous Structure for Properties

We thus created an analogous structure for properties within KBpedia. One useful addition that is forthcoming in the KBpedia v 1.50 release is a mapping of 2500 Wikidata properties to this property schema, which represents more than 95% of all property assignments to the 25 million+ entities within Wikidata. This is one of the first tangible expressions of the benefits of having a fully rational predicate structure within KBpedia.

Attributes, External Relations and Representations comprise OWL properties. In general, Attributes correspond to the OWL datatypes property; External Relations to the OWL object property; and Representations to the OWL annotation properties. These specific OWL terms are not used in our KKO grammar, however, because some attributes may be drawn from controlled vocabularies, such as colors or shapes, that can be represented as one of a list of attribute choices. In these cases, such attributes are defined as object properties. Nonetheless, the mappings of KKO’s grammar to existing OWL properties is quite close. In all cases, our mappings to external sources are done via the subPropertyOf relation in OWL.

Because a given external non-annotation property (that is, all properties except Representations) may either refer to another object (IRI) or to a string or data value, we created parallel listings of object and datatype properties within KKO. Here is the listing for the object properties group as shown by a screen capture from Protégé: 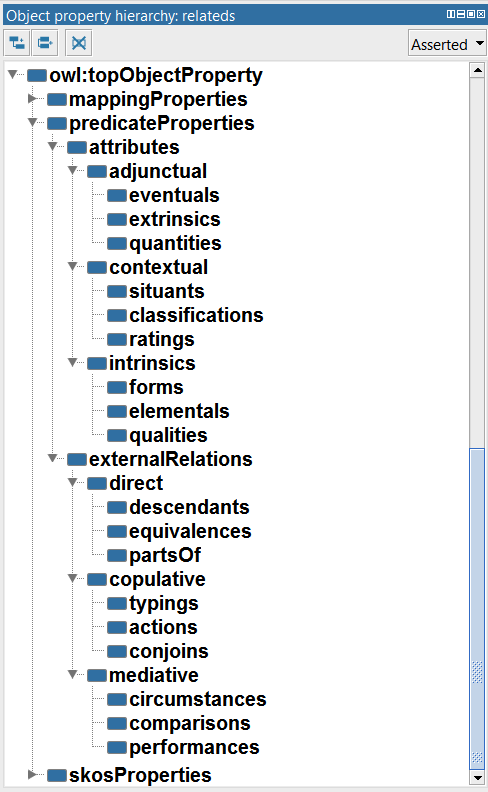 Note that Protégé lists its items alphabetically, rather than our preferred ordering of Firstness, Secondness and Thirdness. You also should note the parallelism to the concept hierarchy discussed above. Not shown is the similar datatype properties structure.

As noted, Representations correspond to annotation properties, and that listing is shown in this screen capture:

In OWL2, annotations may be organized in a subPropertyOf manner, even though inferencing is not possible over this structure. The organization, though, is helpful to understand relationships (and they can independently be reasoned over with the matching concept structure) and may be used in search, SPARQL or external analytic scripts.

We also organize the SKOS and Dublin Core annotation properties used by KKO into the categorical structure of these Representations, as shown by the screen capture above. This organization helps elucidate the structure under the Representations branch using these commonly applied properties.

Some Caveats and Next Part

This completes the hierarchical specification of the Predications branch within KKO. These 39 categories (3 + 9 + 27), following the categorization approach suggested by Peirce’s universal categories, now complete our additions to this next version of KBpedia.

This addition has been under intense and active development for the past year, though it has been in the works for much longer than that. Over that time, the names of categories and, indeed, even the splits themselves, have changed frequently and evolved. Peirce’s Logic of Relatives [7], as one of the two main sources, is itself laid out in a dichotomous structure, though elsewhere in Peirce’s writings — as we showed in the previous parts — these are often expressed in Peirce’s more standard trichotomous structure. I am sure with use and more experience that we will see further refinements to the KBpedia relations schema as time goes on. Please do not be surprised if you see further changes.

We are now nearly complete with the advance material leading up the KBpedia v 1.50 release. We will have one next part in our series recapitulating the terminology and grammar for this new version. The announcement following that will finally release version 1.50.

headline:
KBpedia Relations, Part IV: The Detailed Relations Hierarchy
alternativeHeadline:
Completing the Schema for the Relations Addition
author:
Mike Bergman
image:
http://www.mkbergman.com/wp-content/themes/ai3v2/images/2017Posts/kbpedia-logo-244.png
description:
This article completes the hierarchical specification of the new Predications branch within KBpedia, used for reasoning over relations and mapping properties from external sources. These 39 categories (3 + 9 + 27), follow the categorization approach suggested by Peirce's universal categories, and now complete our additions to the next version 1.50 of KBpedia due shortly for release.
articleBody:
see above
datePublished:
June 27, 2017