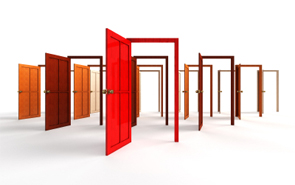 The Internet Has Catalyzed Trends that are Creative, Destructive and Transformative

Something very broad and profound has been happening over the recent past. It is not something that can be tied to a single year or a single event. It is also something that is quite complex in that it is a matrix of forces, some causative and some derivative, all of which tend to reinforce one another to perpetuate the trend. The trend that I am referring to is openness, and it is a force that is both creative and destructive, and one that in retrospect is also inevitable given the forces and changes underlying it.

It is hard to gauge exactly when the blossoming of openness began, but by my lights the timing corresponds to the emergence of open source and the Internet. Early bulletin board systems (BBS) often were distributed with source code, and these systems foreshadowed the growth of the Internet. While the Internet itself may be dated to ARPA efforts from 1969, it is really more the development of the Web around 1991 that signaled the real growth of the medium.

Over the past quarter century, the written use of the term “open” has increased more than 40% in frequency in comparison to terms such as “near” or “close” [1], a pretty remarkable change in usage for more-or-less common terms, as this figure shows: 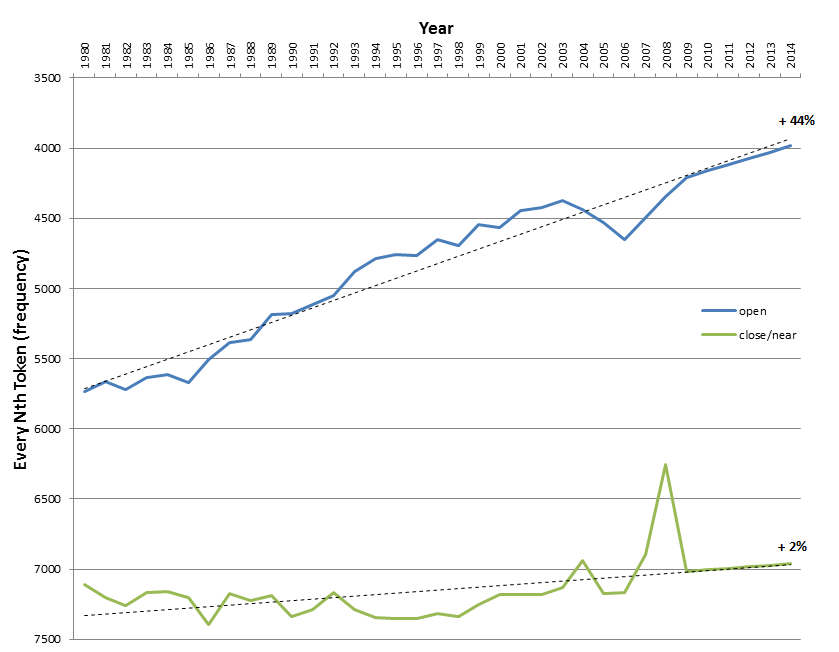 Though the idea of “openness” is less common than “open”, its change in written use has been even more spectacular, with its frequency more than doubling (112%) over the past 25 years. The change in growth slope appears to coincide with the mid-1980s.

Because “openness” is more of a mindset or force — a point of view, if you will — it is not itself a discrete thing, but an idea or concept. In contemplating this world of openness, we can see quite a few separate, yet sometimes related, strands that provide the weave of the “openness” definition [2]:

In looking at the factors above, we can ask two formative questions. First, is the given item above primarly a causative factor for “openness” or something that has derived from a more “open” environment? And, second, does the factor have an overall high or low impact on the question of openness. Here is my own plotting of these factors against these dimensions: 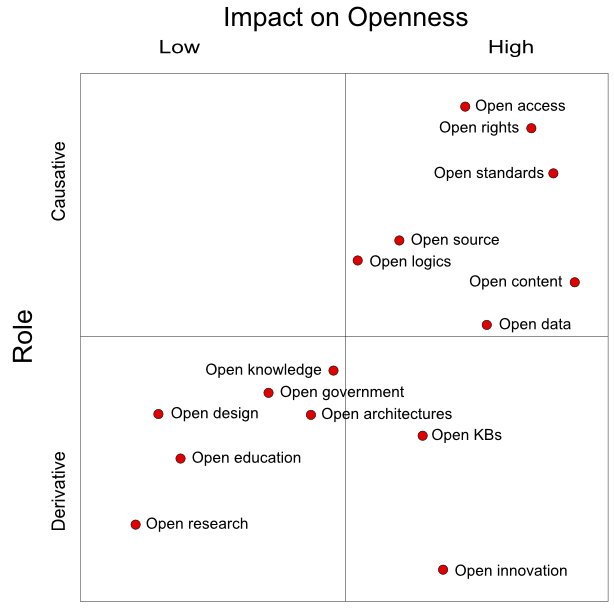 Early expressions of the “openness” idea help cause the conditions that lead to openness in other areas. As those areas also become more open, a positive reinforcement is passed back to earlier open factors, all leading to a virtuous circle of increased openness. Though perhaps not strictly “open,” other various and related factors such as the democratization of knowledge, broader access to goods and services, more competition, “long tail” access and phenomenon, and in truly open environments, more diversity and more participation, also could be plotted on this matrix.

Once viewed through the umbrella lens of “openness”, it starts to become clear that all of these various “open” aspects are totally remaking information technology and human interaction and commerce. The impacts on social norms and power and governance are just as profound. Though many innovations have uniquely shaped the course of human history — from literacy to mobility to communication to electrification or computerization — none appear to have matched the speed of penetration nor the impact of “openness”.

Separating the Chicken from the Egg

So, what is driving this phenomenon? From where did the concept of “openness” arise?

Actually, this same matrix helps us hypothesize one foundational story. Look at the question of what is causative and what might be its source. The conclusion appears to be the Internet, specifically the Web, as reinforced and enabled by open-source software.

Relatively open access to an environment of connectivity guided by standard ways to connect and contribute began to fuel still further connections and contributions. The positive values of access and connectivity via standard means, in turn, reinforced the understood value of “openness”, leading to still further connections and engagement. More openness is like the dropped sand grain that causes the entire sand dune to shift.

The Web with its open access and standards has become the magnet for open content and data, all working to promote derivative and reinforcing factors in open knowledge, education and government: 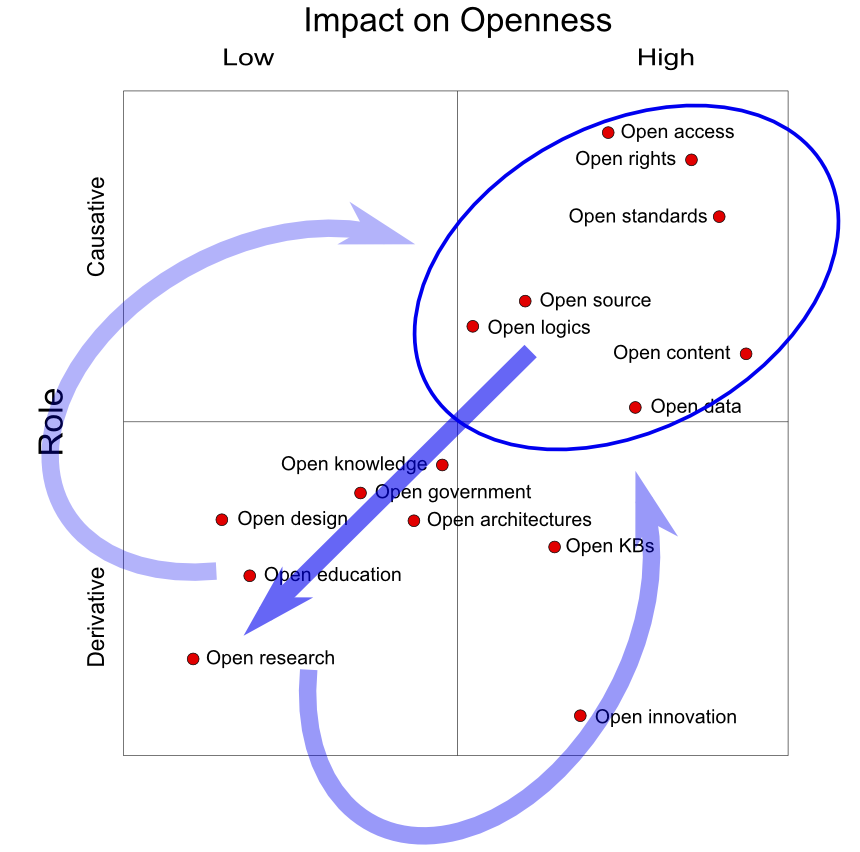 The engine of “openness” tends to reinforce the causative factors that created “openness” in the first place. More knowledge and open aspects of collaboration lead to still further content and standards that lead to further open derivatives. In this manner “openness” becomes a kind of engine that promotes further openness and innovation.

There is a kind of open logic (largely premised on the open world assumption) that lies at the heart of this engine. Since new connections and new items are constantly arising and fueling the openness engine, new understandings are constantly being bolted on to the original starting understandings. This accretive model of growth and development is similar to the depositive layers of pearls or the growth of crystals. The structures grow according to the factors governing the network effect [3], and the nature of the connected growth structures may be represented and modeled as graphs. “Openness” appears to be a natural force underlying the emerging age of graphs [4].

Openness is Both Creative and Destructive . . .

“Openness”, like the dynamism of capitalism, is both creative and destructive [5]. The effects are creative — actually transformative — because of the new means of collaboration that arise based on the new connections between new understandings or facts. “Open” graphs create entirely new understandings as well as provide a scaffolding for still further insights. The fire created from new understandings pulls in new understandings and contributions, all sucking in still more oxygen to keep the innovation cycle burning.

But the creative fire of openness is also destructive. Proprietary software, excessive software rents, silo’ed and stovepiped information stores, and much else are being consumed and destroyed in the wake of openness. Older business models — indeed, existing suppliers — are in the path of this open conflagration. Private and “closed” solultions are being swept before the openness firestorm. The massive storehouse of legacy kindling appears likely to fuel the openness flames for some time to come.

“Openness” becomes a form of adaptive life, changing the nature, value and dynamics of information and who has access to it. Though much of the old economy is — and, will be — swept away in this destructive fire, new and more fecund growth is replacing it. From the viewpoint of the practitioner on the ground, I have not seen a more fertile innovation environment in information technology in more than thirty years of experience.

Once the proper conditions for “openness” were in place, it now seems inevitable that today’s open circumstances would unfold. The Internet, with its (generally) open access and standards, was a natural magnet to attract and promote open-source software and content. A hands-off, unregulated environment has allowed the Internet to innovate, grow, and adapt at an unbelievable rate. So much unconnected dry kindling exists to stoke the openness fire for some time to come.

Of course, coercive state regimes can control the Internet to varying degrees and have limited innovation in those circumstances. Also, any change to more “closed” and less “open” an Internet may also act over time to starve the openness fire. Examples of such means to slow openness include imposing Internet regulation, limiting access (technically, economically or by fiat), moving away from open standards, or limiting access to content. Any of these steps would starve the innovation fire of oxygen.

Adapting to the Era of Openness

The forces impelling openness are strong. But, these observations certainly provide no proof for cause-and-effect. The correspondence of “openness” to the Internet and open source may simply be coincidence. But my sense suggests a more causative role is likely. Further, these forces are strong, and are sweeping before them much in the way of past business practices and proprietary methods.

In all of these regards “openness” is a woven cord of forces changing the very nature and scope of information available to humanity. “Openness”, which has heretofore largely lurked in the background as some unseeing force, now emerges as a criterion by which to judge the wisdom of various choices. “Open” appears to contribute more and be better aligned with current forces. Business models based on proprietary methods or closed information generally are on the losing side of history.

For these forces to remain strong and continue to contribute material benefits, the Internet and its content in all manifestations needs to remain unregulated, open and generally free. The spirit of “open” remains just that, and dependent on open and equal access and rights to the Internet and content.

[1] The data is from Google book trends data based on this query (inspect the resulting page source to obtain the actual data); the years 2009 to 2014 were projected based on prior actuals to 1980; percentage term occurrences were converted to term frequencies by 1/n.
[2] All links and definitions in this section were derived from Wikipedia.
[3] See M.K. Bergman, 2014. “The Value of Connecting Things – Part I: A Foundation Based on the Network Effect,” AI3:::Adaptive Information blog, September 2, 2014.
[4] See M.K. Bergman, 2012. “The Age of the Graph,” AI3:::Adaptive Information blog, August 12, 2012; and  John Edward Terrell, Termeh Shafie and Mark Golitko, 2014. “How Networks Are Revolutionizing Scientific (and Maybe Human) Thought,” Scientific American, December 12, 2014.
[5] Creative destruction is a term from the economist Joseph Schumpeter that describes the process of industrial change from within whereby old processes are incessantly destroyed and replaced by new ones, leading to a constant change of economic firms that are winners and losers.

headline:
The Era of Openness
alternativeHeadline:
The Internet Has Catalyzed Trends that are Creative, Destructive and Transformative
author:
Mike Bergman
image:
http://www.mkbergman.com/wp-content/themes/ai3v2/images/2015Posts/openness.jpg
description:
"Openness" is totally remaking information technology and human interaction and commerce. The impacts on social norms and power and governance are just as profound. Though many innovations have uniquely shaped the course of human history, none appear to have matched the speed of penetration nor the impact of "openness".
articleBody:
see above
datePublished:
January 12, 2015