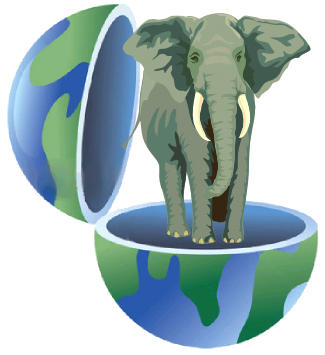 The Foundation of Knowledge Applications Should Reflect Their Nature

Every couple of months I return to the idea of the open world assumption (OWA) [1] and its fundamental importance to knowledge applications. What it is that makes us human — in health and in sickness — is but a further line of evidence for the importance of an open world viewpoint. I’ll use three personal anecdotes to make this case.

Believe it or not, Alfred Wegener‘s theory of continental drift was only becoming accepted by mainstream scientists in my high school years. I experienced déjà vu regarding a science revolution while a botany major at Pomona College in the early 1970s. A young American biologist at that time, Lynn Margulis, was postulating the theory of endosymbiosis; that is, that certain cell organelles originated from initially free-living bacteria.

This idea of longstanding symbionts in the cell — indeed, even forming what was our overall conception of cells and their parts — was truly revolutionary. It was revolutionary because of the implications for the nature and potential degree of symbiosis. And it was revolutionary in adding a different arrow in the quiver of biotic change over time than classical Darwinian evolution.

Today, Margulis’ theory is now widely accepted and is understood to embrace cell organelles from mitochondria to chloroplasts and ribosomes. The seemingly fundamental unit of all organisms — the cell — is itself an amalgam of archaic symbionts and bacteria-like lifeforms. Truly remarkable.

In the early 1990s, my oldest child, Erin, then in elementary school, had been going through a debilitating bout of periodic and severe stomach upsets. I sort of thought this might be inherited, since my paternal grandmother had suffered from ulcers for many decades (as did many at that time).

We were good friends with our pediatrician in our small town and knew him to be a thoughtful and well-informed MD. His counsel was that Erin was likely suffering from an ulcer and we began taking great care about her diet. But Erin’s symptoms did not seem to improve.

My wife, Wendy, is a biomedical researcher and began to investigate this problem on her own. She discovered some early findings implicating a gastrointestinal (gut) bacteria with similar symptoms and brought this research to our doctor’s attention. He, too, was intrigued, and prescribed a rather straightforward antibiotic regimen for Erin. Her symptoms immediately ceased, and she has been clear of further symptoms in the twenty years since.

The nearly universal role of the Helicobacter bacteria in ulcers is now widely understood. The understanding of peptic ulcers that had stood for centuries no longer applies in most cases. Though ulcers may arise from many other conditions, because of these new understandings the prevalence and discussion of ulcers has nearly fallen off the radar screen.

A few years back I began to show symptoms of rosacea, a facial skin condition characterized by redness. My local dermatologist recommended a daily dose of antibiotics as the preferred course of action. I was initially reluctant to follow this advice. I knew about the growing problem of bacterial resistance, and did not think that my constant use of tetracycline would help that issue. I also knew some about the controversial use of antibiotics in animal feeds, and had hesitations for that reason as well.

Nonetheless, I took the doctor’s advice. I rarely take any kind of medicine and immediately began to notice GI problems. My digestive regularity was immediately thrown out of kilter with other adverse effects as well. I immediately stopped using the antibiotics, and soon returned to (largely) my pre-regime conditions. (I also switched doctors.)

Over the past five years, due to a revolution in DNA sequencing [2], we are now beginning to understand the why of my observed reactions to antibiotics. Because we can now analyze skin and fecal samples for foreign DNA, we are coming to realize that humans (as is likely true for all higher organisms) are walking, teeming ecosystems of thousands of different species, mostly bacteria [3].

While there are some 23,000 genes in the native humane genome, there are more than 3 million estimated as arising from these fellow travelers. While we are still learning much, and rapidly, we know that our ecosystem of bacteria is involved in nutrition and digestion, contributing perhaps as much as 15% of the energy value we get from food. We also know that imbalances of various sorts in our walking ecosystem can also lead to diseases and other chronic conditions.

Though the degree and nature is still quite uncertain, our “microbiome” of symbiotic bacteria has been implicated in heart disease, Type II diabetes, obesity, malnutrition, multiple sclerosis, other auto-immune diseases, asthma, eczema, liver disease, bowel cancer and autism, among others. The breadth and extent of implications on well-being is staggering, especially since all of these implications have been learned over the past five years.

There are considerable differences between different human populations and cultures, too, in terms of differing compositions of the microbiome. And these effects are not limited to the gut. Skin and orifices to the outside world have their own denizens as well, likely also involved with both health and disease. Humans are not just complicated beasts, but a world of other species unique unto ourselves.

We Are Not Yet an Open Book, But We Are an Open World

Each of these three anecdotes — and there are many others — point to phenomenal changes in our understanding of the human organism. This new knowledge has also arisen over a remarkably short period. Who knows when the pace of these insights might slow, if ever?

These anecdotes are exemplary about the fundamental nature of knowledge: it is constantly expanding with new connections and heretofore unforeseen relationships constantly emerging. These anecdotes also point to the fact that most knowledge problems are systems problems, intimately involved with the connections and inter-relationships among a diversity of players and factors.

It makes sense that how we choose to organize and analyze the information that constitutes our knowledge should have a structure and underlying logic premise consistent with expansion and new relationships. This premise is the central feature of the open world assumption and semantic Web technologies.

Fixed, closed, brittle schema of transaction systems and relational databases are a clear mismatch with knowledge problems and knowledge applications. We need systems where schema and structure can evolve with new information and knowledge. The foundational importance of open world approaches to understanding and modeling knowledge problems continues to be the elephant in the room.

It is perhaps not surprising that one of the fields most aggressive in embracing ontologies and semantic technologies is the life sciences. Practitioners in this field experience daily the explosion in new knowledge and understandings. Knowledge workers in other fields would be well-advised to follow the lead of the life sciences in re-thinking their own foundations for knowledge representation and management. It is good to remember that if your world is not open, then your understanding of it is closed.

[1]  See M. K. Bergman, 2009. The Open World Assumption: Elephant in the Room, December 21, 2009. The open world assumption (OWA) generally asserts that the lack of a given assertion or fact being available does not imply whether that possible assertion is true or false: it simply is not known. In other words, lack of knowledge does not imply falsity. Another way to say it is that everything is permitted until it is prohibited. OWA lends itself to incremental and incomplete approaches to various modeling problems.
OWA is a formal logic assumption that the truth-value of a statement is independent of whether or not it is known by any single observer or agent to be true. OWA is used in knowledge representation to codify the informal notion that in general no single agent or observer has complete knowledge, and therefore cannot make the closed world assumption. The OWA limits the kinds of inference and deductions an agent can make to those that follow from statements that are known to the agent to be true. OWA is useful when we represent knowledge within a system as we discover it, and where we cannot guarantee that we have discovered or will discover complete information. In the OWA, statements about knowledge that are not included in or inferred from the knowledge explicitly recorded in the system may be considered unknown, rather than wrong or false. Semantic Web languages such as OWL make the open world assumption.
Also, you can search on OWA on this blog.
[2] Automatic DNA sequencing machines now allow direct samples to be sequenced without the need to grow up cultures of organisms. This advance has freed up the ability to take direct samples — such as from soil, seawater, skin, feces or secretions — to identify all DNA present. DNA not matching a host organism or which matches patterns for other known organisms then allows the presence of foreign organisms to be identified.
[3] An excellent piece for lay readers providing more background on this topic may be found in “The Human Microbiome: Me, Myself, Us,” in The Economist, August 18, 2012, pp. 69-72.

headline:
We Are an Open World
alternativeHeadline:
The Foundation of Knowledge Applications Should Reflect Their Nature
author:
Mike Bergman
image:
http://www.mkbergman.com/wp-content/themes/ai3v2/images/2009Posts/091221_open_globe_elephant.png
description:
What it is that makes us human -- in health and in sickness -- is but a further line of evidence for the importance of an open world viewpoint
articleBody:
see above
datePublished:
September 10, 2012